Why is the U.N. Getting Involved with South Sudan’s Oil Strike? 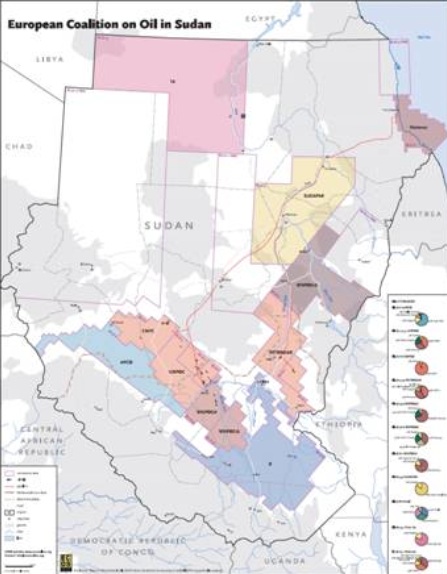 The Second Sudanese war rocked the eastern African continent from 1983 until a peace treaty was signed in 2005.  The war cost millions of people their lives and displaced even more.  The final resolution of this civil war was the secession of South Sudan from Sudan in July, 2011.  While there is a lot of complicated history to this conflict and these troubled countries (ethnic, religious, and economic strife), for our purposes today I will focus on the conflict over the countries’ oil wealth.

As the graphic illustrates (courtesy of ECOS), the majority of oil fields are situated in the southern part of the country.  While the oil rich land existed in the south, the owners of the land and the political and military leaders of the country are in the northern part of the country.  The northern land owners would use the southern residents for cheap (slave) labor.  Along with the freedom from their Northern oppressors, Southern residents hoped the establishment of a South Sudan would give them an economic future that was better than their past.

In the year since the referendum and ultimate secession, the issue over oil rights has not been resolved.  The north continues to desire the world that once was and is not prepared to give up their oil wealth.  The battle over the oil fields has become a chess match and the pawns continue to be the South Sudanese people.  As reported by Reuters, there are “thousands of southerners still trapped in legal limbo on the northern side of the border.”  The displaced are South Sudanese people who “were left without any valid papers after a deadline passed for them to apply for Sudanese citizenship.”  Until this mess is cleared up, they can’t go home.

After two decades of civil war and a regime of forced labor that predates that by more decades, the People of South Sudan have had enough.  The South Sudanese capital of Juba shut down its output of roughly 350,000 barrels a day in January.  The country leaders want “to reach a deal to set up a demilitarized border zone before oil exports can resume.”  They are seeking protection from their aggressors from the north.

In the midst of this negotiation enters the U.N. Security Council (UNSC).  They want in on this game of chess.  On August 31, the UNSC “urged Sudan and South Sudan to expedite and finalize their oil agreement and other related financial arrangements to pave the way for immediate resumption of oil production and transportation.”  While the UNSC may have a valid basis for advising South Sudan to restart exports on an industry that represents “98% of the South Sudan’s annual budget,” the move seems to me to smack of unnecessary paternalism.

Would the UNSC read a statement into the record to stop a strike at an Indian steel mill or a German auto plant where workers are complaining about unsafe working conditions or low pay?  Is this move to influence a domestic economic decision within the UNSC’s mandate?  Has the U.N., once again, overstepped its authority?