Women’s Rights in Afghanistan – Something Needs to be Done 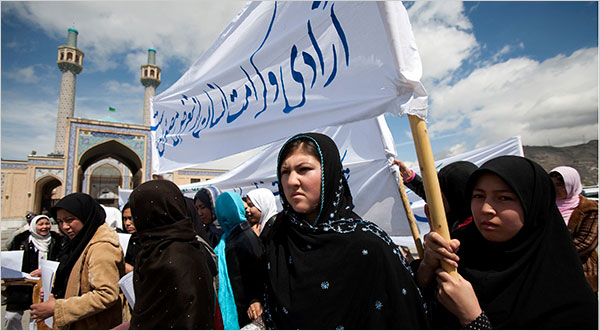 On Sunday, October 14, 2012, Afghani woman Mah Gul was killed, after her throat was slashed by her mother-in-law and her mother-in-law’s cousin. Why; because Mah would not prostitute herself while her husband was at work. This tragic story highlights the plight of young women in Afghanistan. They are treated as property, being subjected to forced prostitution and marriages, forced prostitution within the forced marriage, and even being given away to settle family debts or disputes. In 2011, 13 year old Sahar Gul was forced to marry a member of the Afghan army; he raped her, and then when she did not conceive immediately thereafter, she was locked in the basement, tortured with hot pokers, raped, and had her fingernails ripped out. Another young girl, Aesha, had her nose and ears “hacked off” after she tried to run away from her husband, and was left for dead (she is now living safely in the United States). Other stories include a 5 year old being raped by two men and then being cast away into a river, and a woman being forced to marry the man who killed her husband, then killed one of her children, and made her wear a suicide vest.

These are just some of the stories, all with the same theme – the complete degradation and brutality that Afghani women face while they are living under Taliban rule. Furthermore, while women were allowed to go to school in 2004, in 2009 this right was again taken away by the Taliban.

Under the Universal Declaration of Human Rights, rights such as education, liberty, entering into marriage by freedom and consent, and freedom from servitude are guaranteed. As a member of the UN, Afghanistan has ratified these rights to some extent.

What should the UN do about these blatant human rights violations in Afghanistan against women? Should there be programs put in place to specifically help get women out of Afghanistan to be able to live free lives in other countries? Do you think Afghanistan will ever change its view on women and their role in society?