A Need to Move Away from Non-Intervention?: The Case in Syria 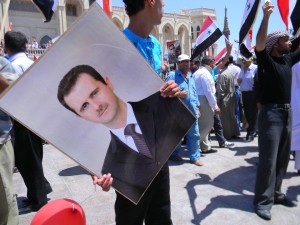 As President Obama’s second inauguration is approaching, the news surrounding the administration has been focused on mainly domestic issues: the debt ceiling, gun control and the lack of bi-partisan negotiation.  What the news cycles are lacking, of course, is an international focus, this time on the problems in Syria.

President Obama on December 11th recognized the Syrian Opposition Council, those who are fighting against President Bashar-al-Assad’s regime, as the “legitimate representatives of the Syrian people.” This fell short of recognizing them as the legitimate “government” of the Syrian people which leads John Bellinger, former legal advisor to the State Department, to posture an interesting international law debate.

The announcement by President Obama created no new legal basis for the Obama Administration or any other foreign power, who made similar remarks, to give aid to the rebels or intervene with military force where the death toll has already exceeded 60,000. This constraint is due to the United Nations Charter which prohibit member states from using force or intervening in the affairs of a sovereign state without a U.N. Security Council authorization or in the promotion of self defense. With Russia and China blocking approval, the U.S is constrained.

Mr. Bellinger discusses how some human rights advocates, government officials and others believe that those traditional notions of non-intervention  “unduly constrain” governments from trying to aid in preventing mass deaths and turmoil in other nations.

He furthers states that conservatives are skeptical of constraints that restrict sovereign nations from acting and agree with the liberal human rights advocates that these constraints are wrong. However, the United States and other governments are fearful that rules other than non-intervention may be abused by other, more aggressive nations.

As of right now, the U.S has increased humanitarian aid, up to around $210 million dollars. Obama has cautioned about intervening without an international legal basis as this would look hypocritical if the U.S were to criticize other nations for doing the same-other nations whose motives may be less pure. There is also the fact that more arms in an already devastating conflict may not be the best solution to anything.

-Is the traditional notion of non-intervention legitimate where atrocities on the scale of Syria are being committed?

-Mr. Bellinger ends his op-ed by saying that “intervention is morally, if not legally, justified.” Is there a moral basis for such action and does that overcome a lack of a legal one?