Lack of Rights for Palestinian Prisoners in Israel 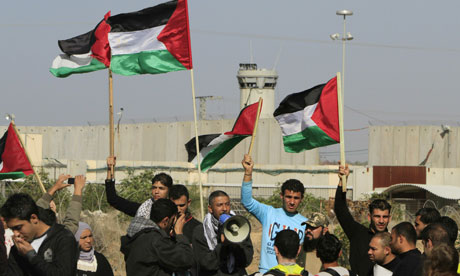 Palestinians have been protesting Israeli detention policies, fed up with what they feel are examples of Israel’s unjust rule over their lives. There are about 4,800 Palestinian prisoners in Israeli jails, and in Israel these prisoners are claimed to be political prisoners or freedom fighters, with most alleged to be terrorists with blood on their hands. It should be noted that 15 members of Parliament, a football player, a political cartoonist, and hundreds of stone-throwing youths are included in the mass of Palestinian prisoners, and Amnesty International deems a handful of the prisoners as human rights defenders and prisoners of conscience.

Another prisoner right now is Karajeh, who is a member of the Stop the Wall organization, an advocacy group that does not protest, rather campaigns against Israel’s metal and concrete barrier into the West Bank. She has yet to be charged. He has been in an Israeli prison for 5 weeks in solitary confinement, and claims he is being denied medical treatment from an old leg injury. However, Israeli’s military laws in the occupied West Bank state that Palestinians can be held for 90 days without being charged, and in cases that prosecutors think are especially sensitive, detention can be indefinite.

Last month, a prisoner died after being held for a week. The news of the healthy, 30 year old Palestinians death led to massive demonstrations on the West Bank. The man’s autopsy revealed cracked ribs and bruises, causing Palestinian leaders to allege that the man was tortured to death, while Israel claims the wounds were likely due to resuscitation efforts. The reason for the man’s death are not known at this time, with Israel saying more tests were needed to determine why the man had died.

Local West Bank authorities estimate that 800,000 Palestinians have been detained under Israeli military orders since the 1967 War, when Israel captured the West Bank, East Jerusalem, and Gaza. The Palestinian Liberation Organization claims that those who are charged face a 99% conviction in military tribunals.

Is Israel’s military law which allows for a 90 day holding period without a charge, and indefinite detention in special cases, a necessary law, or should this law be changed? If it is true that 99% of those charged are convicted, do you believe that is due to a potentially unjust judicial system, or merely a great conviction rate? With protests becoming physical now, if Israel does not change its policies, what could the future repercussions be?