Battle for the Sea 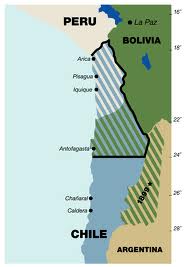 A few months ago, Bolivia filed a lawsuit against Chile at the International Court of Justice to reclaim access to the Pacific Ocean. Bolivia lost access to the coastline after their 19th Century war with Chile. Chile won the war and annexed 120,000 sq km of Bolivian land, 400 km of it being Pacific coastline land. As a result, Bolivia has been landlocked ever since. The two countries signed a peace treaty in 1904 which gave Bolivia access to Chilean ports as well as providing a railroad from the Port of Arica to La Paz, Bolivia’s largest city.

The suit “requests that the International Court of Justice adjudge and declare that Chile is obliged to negotiate in good faith with Bolivia a prompt and effective accord that grants it a fully sovereign outlet to the Pacific Ocean,” said the Bolivian Foreign Minister. The Foreign Minister also claims that the current boundaries between Bolivia and Chile are not valid because the 1905 agreement had been signed by Bolivia under duress. The purpose of this suit is to create an “effective  agreement that grants it [Bolivia] fully sovereign access to the Pacific Ocean”. Bolivia has tried to reclaim the land numerous times in the past, but failed.

In the eyes of Chile, there seems to be no dispute. They refuse to give back any sovereign territory because they took the land under a legitimate agreement in the Treaty of Peace and Friendship. They don’t seem to be worried about Bolivia’s move either, claiming “no one in the world will accept that a country unilaterally dismisses a treaty which is in full force” As stated earlier, Bolivia believes that the treaty was signed under duress and should be reversed. Bolivia has a tough task ahead of them in dismissing a treaty that has been in effect for such a long time.

Although this dispute could get ugly, there are certainly benefits for both countries. A settlement by both countries would greatly help their already diminished relationship. This would include increased trading between the two countries which would benefit their economies. For example, Bolivia is rich in natural gas but refuses to sell it to Chile who is energy deficient. This would help Chile solve their energy problem while expanding income for the Bolivians.

Regardless of the pros and cons, both countries have a history that will play a major role in determining the outcome. The president of Bolivia has already made a pledge to the people claiming that they will get their sovereignty back.

Do you think Bolivia has a legitimate shot at overturning a Treaty by raising the defense of duress? Although a settlement would yield benefits, how much of a factor will the two countries past play? Could you think of any other alternatives that would benefit both countries while preserving their relationships?