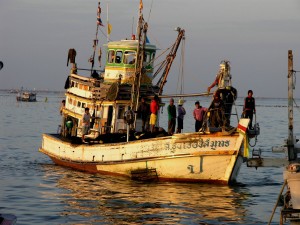 Thailand has been a leading fish exporter since 1999. In recent years, a growing national economy and labor recruiting difficulties have led the industry to heavily rely on foreign labor. The International Labour Organization (ILO) reports that the “Thai workforce has been less attracted to work in the fishing sector due to a major natural disaster in 1989…and rising education levels.” As a result the industry’s fishers are “predominantly irregular migrants from [Burma] Myanmar and Cambodia”.

The industry has become involved in “widespread exploitation and abuse of workers, including forced labour and human trafficking.” A large majority of these workers are “deceived or coerced into work in fishing.” In a 2013 study, the ILO found that most of these workers were “working against their will and unable to leave because of the threat of penalties, violence or denunciation to the authorities.” The ILO also found that the majority of those taken out to sea “were subjected to deceptive or coercive labour practices.”

Boat owners and captains work with brokers. These brokers are known to trick young men from neighboring nations such as Burma and Cambodia. They promise them well-paid employment in factories or agricultural work. Instead, these young men end up being taken to boats and forced to work for no pay. They are told that they owe the brokers a fee for finding them work. These men work about 20 hours a day, seven days a week. Most of those who escape end up being arrested and deported. Some are taken to shelters. Thai military police conduct irregular boat rounds, but this does not accomplish as much as one might think. Unless they are told by the workers that they are subject to forced labor, they do not really take action against the boat owners and captains.  Most only speak Thai and communicate with the workers via general hand signals.

Despite numerous efforts by international organizations and human rights groups there still remains a lack of adequate regulation of the industry. What’s more, there is no protection for these workers, who are victims of a vicious system. The ILO reports that “[c]oncerns about abuse and exploitation of fishers, particularly migrant fishers, have led to calls from human rights groups, the international community and retailers for the Government and industry to strengthen regulation and protection.” Nevertheless, this industry seems to remain largely unregulated.

I wonder how can this remain such an unregulated industry when there is so much domestic and international attention. Maybe leaving it up to Thailand’s government is not enough. Do you think international authority needs to be present? What organizations or courts should get involved and how?

Trafficking of Fishermen in Thailand