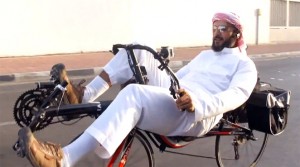 Saudi Arabia’s King Abdullah bin Abdulaziz ratified a new counterterrorism law that goes into effect last June in the Arab nation, drawing criticism from human rights groups who argue the law unduly restricts free speech. The law is composed of forty-one (41) articles, and it states that any act which undermines the State or society can be tried as an act of terrorism. According to a report by the Saudi Press Agency, terrorism is defined as:

Any act carried out by an offender in furtherance of an individual or collective project, directly or indirectly, intended to disturb the public order of the state, or to shake the security of society, or the stability of the state, or to expose its national unity to danger, or to suspend the basic law of governance or some of its articles, or to insult the reputation of the state or its position, or to inflict damage upon one of its public utilities or its natural resources, or to attempt to force a governmental authority to carry out or prevent it from carrying out an action, or to threaten to carry out acts that lead to the named purposes or incite [these acts].

Last month Human Rights Watch (HRW) urged Abdullah to reject the counterterrorism law, passed by the Saudi Council of Ministers on December 16. Over the past year, a number of individuals have been imprisoned in Saudi Arabia for crimes of terrorism or sedition against the state. In December a court sentenced political activist Omar al-Saeed to four years in prison and 300 lashes for urging Saudi Arabia to become a constitutional monarchy. In July a Saudi court sentenced the editor of a liberal website to seven (7) years in prison and 600 lashes for his role in founding an Internet forum that violates Islamic values and propagates liberal thought. In June HRW and other advocacy groups urged the EU to condemn Saudi Arabia for convicting seven governmental critics of inciting protests through Facebook. Also in June a rights activist was sentenced to eight years in jail for sedition. Last March two human rights activists were sentenced to at least ten (10) years in prison for sedition, providing foreign media with inaccurate information, founding and operating an unlicensed human rights organization, and other criminal offenses.

What do you think of the Saudi’s new “counter-terrorism law”? Imagine this law was passed by Congress in the United States; what kind of constitutional arguments could you raise in defense and in support of it?