Nigeria Mass Kidnapping MUST be Addressed 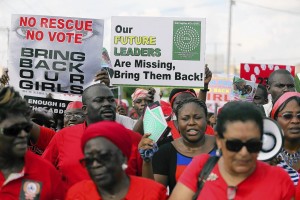 On April 14, 2014, in the town of Chibok in Nigeria over 300 schoolgirls were kidnapped by the Islamist militant group Boko Haram. Boko Haram began a series of attack on schools within the town, and despite soldiers taking the offensive, they were outnumbered and outgunned and were unable to stop the onslaught. Upon their escape, desperate parents, who received no help and no recognition for their plight armed themselves with homemade weapons to find Boko Haram and get their children back. This was a result of the Nigerian government’s slow and lack luster response to the situation and the need to stop Boko Haram from selling the kidnapped schoolgirls into sexual slavery and preventing even more harm from coming to them.

Who is Boko Haram you may ask. They are a radical militant Islamic terrorist organization, with connections to al-Quieda, seeking to prevent the spread of western education into Nigeria, and potentially the surrounding areas. Boko Haram began kidnapping women and girls from across north-east Nigeria last year, as well as causing mass bombings and other horrendous acts to further their cause. The Nigerian government’s response has been irreesponsive, taking almost three weeks before anything substantive was done. Even then, on May 2, 2014, the Nigerian President solely established a fact finding committee that was only concerned with public interface with all directly concerned with the tragedy. However, security forces have continued to sweep the area to find the schoolgirls.

The situation is exacerbated even more with little to no international response. In the all so regretful United States fashion, US media outlets have failed to fully address the issues that Nigeria is facing (possibly because it involves people who mainly adhere to Islam). They have neglected to bring these issues of Boko Haram to the forefront of the US mind and have forgotten about these schoolgirls entirely. This definitely has had an impact on the nation’s ability to come together and advocate for these women and force the government to protect them. It was only until other countries started acting did the US decide it was important enough to at least address the situation.

Nigeria is distraught by the terrorist activity of Boko Haram and is a country in dire need of help and this post is not only to spread the issues, but also as a call to all our subscribers to spread the word of what is going on in Nigeria. We reside in the United States and are not impacted too greatly when terrorist activity is present in places like Nigeria, however, these are children and their parents are in desperate need of help. I urge all of you to continue to spread the word of this atrocity and urge Congress, Representatives, and anyone with the smallest bit of influence to get out there and let everyone know of what is going on and have them do something about it. Thank you.