The European Court on Human RIghts to decide Khoroshenko case. 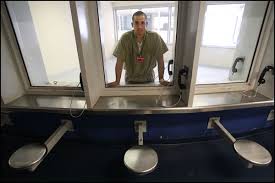 In 1995, Andrey Khoroshenko was convicted of murder and sentenced to the death penalty. However, in 1999, his punishment was altered from the death penalty to life imprisonment. Khoroshenko challenged the constitutionality of the ten-year ban in August 2004, alleging that this policy violated his “right to respect for private life” and had an overall discriminatory impact. In the end, the Russian Constitutional Court dismissed his complaint and the case been on appeal for a decade.

On September 3rd, 2014, The European Court on Human Rights (ECHR) held a Grand Chamber hearing to resolve the dispute between. The strident issue at hand is whether the ten-year ban on long-term family visits contained in the Russian Code of Execution of Criminal Sentences violated Khoroshenko’s rights during his confinement at a special regime correctional colony.

This case speaks directly to the issues Russia has dealt with concerning supposed human right violations in their penal system. As recent as 2012, the Russian government received recommendations from the U.N. Committee on Torture providing them with methods to lessen the harsh conditions experienced by prisoners. This came after the committee “discovered the use of torture in the Russian law enforcement system and Army.”

I find the whole situation disturbing. I understand that it is impossible for the international community to force Russia to remodel their entire penal system instantly but these are basic human rights that need protecting. Khoroshenko was not even able to see his own family more than twice a year for two hour intervals. These are the only people who could possibly support someone in his position and he was forced to not only deal with the brutal everyday conditions but to do it with minimal outside contact. Furthermore, Khoroshenko did not even receive a fair chance in Russian Constitutional Court as they refuted all of his claims. Khoroshenko received no support from the Russian government and had no choice but to go to the ECHR to possibly obtain a remedy. The decline of these practices needs to start somewhere. This may seem like a minor issue compared to torture but Russia needs to respond positively to the ECHR’s decision to exhibit the slightest proof that they are progressing towards a more acceptable penal system.

Do you think that a person in Khoroshenko’s position should receive long-term visits from relatives or did he relinquish that right by committing a violent crime? Why did the Russian Constitutional Court reject his claim and will they respect the ECHR’s decision on the matter? How do you think the European Court on Human Rights should rule?