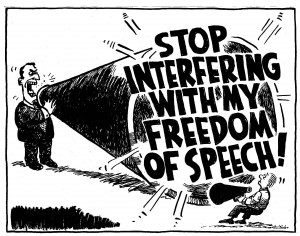 Free speech is undoubtedly one of the most fundamental rights in the United States. In what became known as the “Pentagon Papers Case,” the Nixon Administration attempted to prevent the New York Times and Washington Post from publishing materials belonging to a “classified” Defense Department study regarding the history of United States activities in Vietnam. President Nixon argued, that preventing the press from publishing the study was necessary for protection of national security. Still, the Supreme Court found that publicizing the study did not actually pose a serious threat to national security, and denying press the right to do so would therefore constitute a violation of free speech.

Australia currently faces similar issues. According to the International Criminal Court, the Australian parliament is scheduled to debate new set of laws, which are supposed to aid in counterterrorism efforts. The laws will criminalize the reporting of “special intelligence operations,” even though the true definition of the term has not yet been provided. Based on the case discussed above, it should be clear that classifying something as “confidential” or “secret” does not necessarily mean that it should not be published. The fear is that severe punishments (imprisonment for up to 10 years) associated with such reporting and whistle blowing will lead to infringement on free expression. I believe this concern is legitimate.

It is hard to imagine that people, both the general public and reporters, would be willing to risk potential jail time, for reporting on controversial issues often associated with actions of the government. Furthermore, the offense currently covers “recipients of an unauthorized disclosure of information” who “engage in any subsequent disclosure.” This means that not only those who report, but also the ones who share what has been said could be held responsible for the disclosure. This fact creates a huge social media concern because all it takes to violate the new set of laws is basically a click of a button. Does this seem reasonable?

Counterterrorism laws and activities became a necessity in the post 9/11 world, but how far can the government take the efforts to protect national security? There have been some issues with determining where to draw the line. Most people have no problem with heightened security checks, but is infringing on the information published by the press going too far? What could be the repercussions of limiting the press? All of these questions need to be taken into consideration.