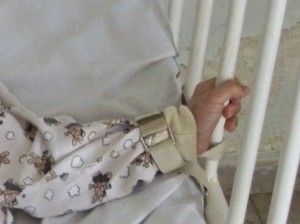 Imagine being caged to your bed, tied down and deprived of the most basic human rights of adequate care and education. BBC reported this devastating practice at the Children Care Center of Lechaina, in Southern Greece for children suffering with disabilities.

In March 2011, the Greek Ombudsman’s Office of the national human rights institute published a report on the center stating the low numbers of doctors and nurses, systemic education, and horrific practices of tying children and adults to their beds to reduce self-harm. The institute was also reported to be using wooden cage beds during staff shortages. In addition, those with chronic diseases and disabilities in the center were not receiving proper medical care and many of the children were not even receiving an education.

Due to the lack of institutions in Greece, most of the residents will live in the care center until they become adults or even all of their lives, stripping them of their dignity and rights. These children deserve to be placed in community care where they will receive an education or with foster families who can give them the attention and love they need.

This practice in Greece is similar to that of the abusive practices reported in Russian state orphanages where staff members were confining children with disabilities to their cribs for days and even weeks.

After the Ombudsman’s report was released, along with the European Disability Forum, Humans Rights Watch reported these abusive conditions in an open letter to the minister of health and in submissions to the U.N. Rights Bodies. In 2012, the Untied Nations Committee on the Rights of the Child voiced its extreme concern for the practices at the center and encouraged Greece to stop subjecting children with disabilities to these inhumane practices.

While these problems are inextricably linked to limited financial resources in Greece and a public sector hiring freeze from the state’s lenders, the European Union, and the International Monetary Fund, these practices should not be tolerated by the government. Three years after the Ombudson’s report came out, conditions at the center have barely improved. Investments need to be made to figure out alternatives to caging the residents who need proper care.

Greece should be encouraging improvement of the living conditions in the Lechaina center as well as its other institutions by ending the use of caged beds and tying patients to their beds. These practices are inhumane and are depriving children of receiving an education and the care that they need.

How do you think this problem should be resolved? Why do you think the government of Greece has not intervened in this crisis and taken more action to ensure humane treatment of these children?