You Can Speak Up, But It Will Cost You 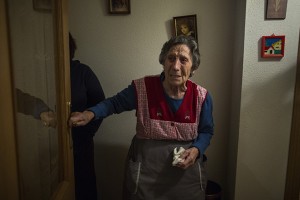 The economic crisis in Spain is old news by now. Everybody knows that the situation in this European country has been dire for quite some time, but recently a new light was shed on the troublesome state of events. The crisis reflected on the housing market. The sad picture of 85-year-old Carmen Martínez Ayuso, who was evicted from her home after failing to make her mortgage payments, shocked the world. Taking such drastic measures, after this woman has been living in the house for the past 50 years, has shaken activists to their very core.

Many asked how is this possible. The answer is strict mortgage laws. It would seem that the Spanish banks refuse to talk, or negotiate with mortgage payers. Under the Spanish law, defaulters are now personally liable for the full amount of their mortgage loans. “After penalty interest charges and tens of thousands of dollars in court fees, former homeowners can end up without their homes and owing more than they originally borrowed when foreclosure proceedings are finished.”

This has created an enormous amount of stress, and resulted in a wave of eviction-related suicides. Because of this, a famous activist, Ms. Ada Colau, has created an organization commonly known as PHA “Platform for People Affected by Mortgages.”

Still, the fight is far from over. The figures are downright terrifying; in the first six months of 2014, banks reclaimed over 26,500 homes. “The dream of owning one’s own home has, for many, turned into a nightmare of foreclosures, evictions, and over-indebtedness.” More people need to join Ms. Colau’s efforts in order to get the banks and the government to change the laws that offer no aid, or recourse for people struggling due to the economic crisis.

The officials perceive Ms. Colau as an annoyance, which is supported by the fact that he government drafted a set of strict new laws against public protests. It is believed that these laws are aimed directly at her initiatives. Regardless, she keeps pushing forward and was recently awarded the European Citizen’s Prize for PHA by the European Parliament. What can be done to aid PHA and Ms. Colau’s efforts? Why is Spain reluctant to change the unduly burdensome laws? Is this issue purely domestic, or does it concern the international community as a whole?