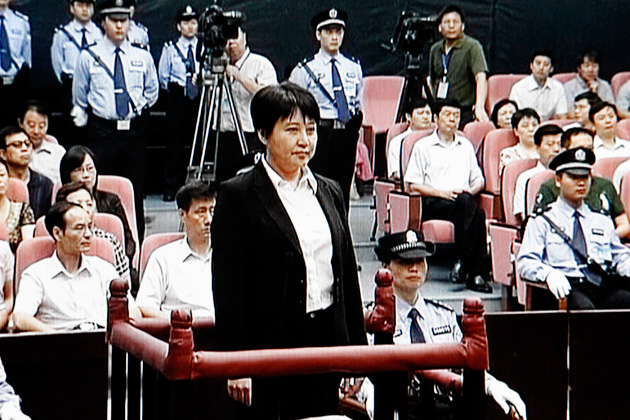 Tomorrow morning, August 20th, the verdict and sentencing will be announced in the Gu Kailai murder trial.  Gu Kailia is the wife Chinese political leader Bo Xilai, who has been disgraced by this incident.  Bo Xilai had been campaigning for induction into the Standing Committee of the Politburo, but has been suspended from Politburo since news of his wife’s acts had been revealed.

Ms. Gus confessed to poisoning Neil Heywood with cyanide, on November 13th of last year.  She claimed that she feared Mr. Heywood was going to harm her son Bo Guagua after a $22 million real estate deal between the two had fallen apart. The murder took place in Mr. Heywood’s hotel room in Chongqing.

According to details discovered at trial Ms. Gu and Mr. Heywood drank tea and wine that Ms. Gu provided until Mr. Heywood got so that he fell in bathroom.  After this occurrence Mr. Zhang, the accomplice, came in and moved Mr. Heywood onto the bed.  Once Mr. Heywood was on the bed, Ms. Gu dripped a cyanide-laced poison from a soy sauce bottled into his mouth.  Once the poisoning was completed Ms. Gu scattered pills all over the floor to make it look as though Mr. Heywood had overdosed.  Before leaving the hotel Mr. Zhang and Ms. Gu hung a “Do Not Disturb” sign on Mr. Heywood’s hotel room door and informed the hotel staff that the guest in Room 1605 wanted to be left alone.

There has been much speculation about what type of sentence Gu Kailai will receive.  Many believe that the decision will lie with the party leaders in Beijing because China’s legal system is heavily dictated by the politics of the country.  Many also believe that a guilty verdict is inevitable because Ms. Gu has admitted to poisoning Mr. Heywood; however, they think she will be spared from an execution.

What do you think would be a fair sentence for Ms. Gu?  Do you think it is unfair for the political leaders opinions to carry so much weight in the court system?  What type of sentence do you think her accomplice Mr. Zhang should get?

Photograph by CCTV via APTN