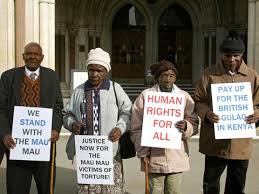 From 1952-1961 there was an event labeled the Kenyan Emergency. During this time, fighters from the Mau Mau movement in Kenya targeted the British. British colonial forces were sent to quell the situation resulting in tens of thousands of these rebels being killed and over one hundred and fifty thousand Kenyans being put in detention camps. These camps have been compared to the Gulag forced labor camps. Three Kenyans claim that they, among many others, were tortured while in these camps. The torture inflicted upon them ranged from rape to severe beatings to castration.

These three Kenyans brought a claim for damages against Britain. The problem is that these events happened over 60 years ago and it was not certain if a Court would hear it. This past week however, the Kenyan torture victims passed their first hurdle to getting their day in Court. A British Court ruled that the three elder Kenyans could pursue their claims damages. The government and the military commanders at the time kept meticulous records and as a result, the Court found that there was enough evidence for both sides to allow the Court to accomplish its task.

The British Foreign Office stated that there is no doubt that these people were tortured. One of many concerns they have however, are the legal implications the decision to allow this case to continue will have on other claims. They have filed an appeal.

The questions I pose are should a statute of limitations be placed on this case? The event happened over 60 years ago, many of the people in key positions at the time are dead. Can this case really be tried fairly against the British government? On the other hand, these were poor uneducated Kenyans on the losing side of a revolution with no access to legal counseling. Should justice not be given to crimes committed against them no matter the number of years that have passed? What about the flood of claims similar to these that are due to follow from other crimes committed in other colonies once owned by the British government? It was once said that the sun never set on the British Empire. Should there be no time limit to file a claim?