Slavery Still Lurks in the Shadows 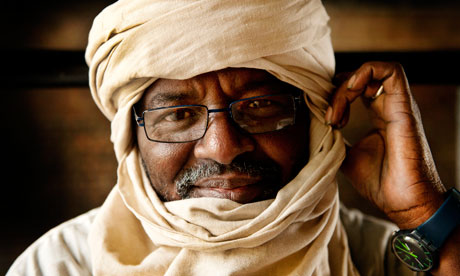 Ibrahim Ag Idbaltanat is president of Temedt, an organization working to end slavery in Mali. Photograph: Linda Nylind for the Guardian

Slavery was formally abolished in Mali in the 1960s. Although slavery is not allowed under the constitution, there is no anti-slavery law.  Descent-based slavery through the maternal bloodline still exists in northern regions of Mali. There are approximately 800,000 people of slave-decent in Mali, 200,000 of whom are under direct control of their masters. People descended from slaves are considered the “property” of their “masters”. They live with them and serve them directly, or they live separately but remain under their control. Those who live in villages hundreds of miles away from their masters can expect the occasional visit to collect their share of crops or take children away to be household servants.

In 2006, Ag Idbaltanat, an activist who received the Anti-Slavery International award in London, set up the anti-slavery group called Temedt, which means “solidarity” in the Tamasheq language.  Ag Idbaltanat, himself a descendant of slaves, has seen the abuse and struggles first hand.  In 1976, he saw a former slave, who had spent years working to amass a herd of cattle, have his animals taken from him by his master. The master told the court that the cattle belonged to him, even though the entire community knew this was not the case. Also, 18 children of slaves were kidnapped recently by traditional masters of their families and taken to be servants. In 2004, a slave was shot in both knees by his former master and needed emergency amputation. The local doctor refused to treat him because he did not have enough money. He finally agreed to operate after Ag Idbaltanat paid him, but by then it was too late and the man died.

Temedt has more than 30,000 members, and has helped to free and support dozens of enslaved people. It provides legal advice to victims of slavery, trains magistrates on anti-slavery legislation and lobbies for legal reform to criminalize slavery practices. The organization is the first to dare to come out and say that slavery persists in Mali, along with Niger and Mauritania. Ag Idbaltanat says the government continues to deny this in fear that official acknowledgment may lead aid donors to withdraw. The government has accused anti-slavery activists of being unpatriotic for airing dirty laundry in public. But Ag Idbaltanat insists that he and fellow activists are the genuine patriots. “We believe we are the patriots to talk about a central problem in Mali,” he said. “It is something that pervades society, it has an impact on democracy, it excludes people from basic services and it is a factor in the conflict now.” “In a society where slavery exists, there is no justice and the law of the strongest prevails. Where there is slavery, there is stratification of society, subdivisions, frustration and tension. The state pits different groups against each other and the Islamists exploit the frustration against the feudal system.”

Despite the current crisis, Ag Idbaltanat is optimistic. He says, “My hope is that stability will return.”

Is it shocking that slavery still exists across the world? Since slavery in not allowed under the Constitution of Mali, why haven’t they enacted an anti-slavery law? Are they trying to keep it a secret in fear of public ridicule, or are they simply fine with allowing slavery to exist in Mali? Should the UN intervene to stop these atrocities? If so, what course of action should they take?