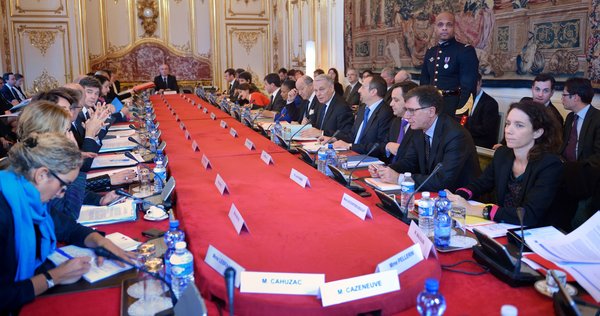 Tuesday France announced that it would be making cuts to payroll taxes for businesses in an attempt to make their country more competitive for investments and increase exports. Prime Minister Jean-Marc Ayrault noted, “France has now 10 years of industrial stagnation.” He is certain that without change this plateau will turn into a decline. During France’s decade of stagnation it has lost 750,000 industrial jobs, in part, because of the tax burden borne by businesses and the difficulty employers have with firing employees.

The government’s plan is to cut payroll taxes by $25.6 billion (20 billion euros) over the next three year. Gilles Moëc, an economist at Deutsche Bank in London called the government’s plan “a cultural shift for the French Socialists.” However, France declined to adopt “broader changes” that were recommended by an expert panel led by Louis Gallios, a prominent business executive.

To help offset the loss to the government’s coffers it has planned to cut spending and raise sales tax. The changes to sales tax will include raising the value added tax from 19.6 percent to 20 percent, an increase on the “intermediate tax,” which covers things like restaurant meals, of 3 percent, but a decrease on the minimum value-added tax, on basic needs like food, from 5.5 percent to 5 percent.

The Prime Minister’s action has already received criticism from the left, who are claiming raising taxes and cutting spending will only further weaken the economy because it will lead to what Jean-Claude Mailly, secretary general of Force Ouvrière, a relatively militant union, calls “social dumping.” Meaning other countries, such as Germany, will then cut their labor costs to remain competitive. Opponents of the tax cuts are also concerned with the effects it will have on benefits such as their universal health care and pension plans.

The Prime Ministers response to his opposition is that the tax cut is estimated to add half of a percentage point to economic growth and generate as many as 300,000 or 400,000 jobs by 2017.

Is this tax plan the best response to France’s economic plateau? Jörg Krämer, chief economist at Commerzbank in Frankfurt, discussed how Germany had gone through a similar labor-market restricting over the last 10 years. He noted that a key element of the program was a reduction in the long-term benefits paid to the unemployed and wider availability of temporary work. This caused more unemployed to look for jobs, which allowed for a more flexible labor market and more moderate wage demands. Or, is there a way in which France can increase its economic growth without having to sacrifice it much coveted social programs?