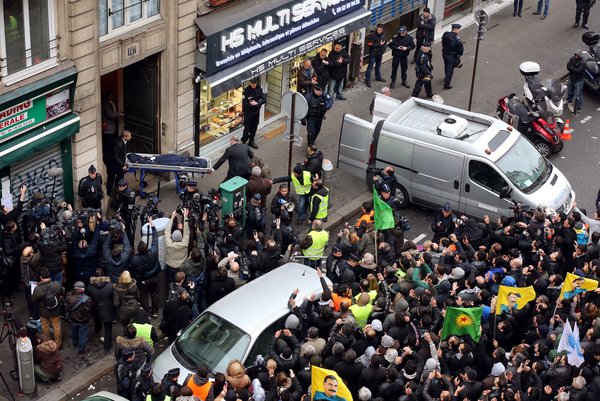 Early Thursday, three female Kurdish activists were murdered in what looks like an extremely thought-out killing. One of the victims was a founder of the Kurdistan Worker’s Party (P.K.K.), which is known for the guerilla war it has fought against Turkey over the last 30 years. The women were shot twice in the head, once in the stomach, and left in an office which had been locked from the outside.

The three women are allegedly Leyla Soylemez, Fidan Dogan, and Sakine Cansiz. Cansiz is the founder of the P.K.K., and played a vital role in rounding up support for the Kurdish political cause in Europe. Dogan was the head of the Kurdish Information Center as well as a representative of the Kurdistan National Congress. The final victim, Leyla Soylemez, was a young Kurdish activist.

There are various theories behind the motive of these brutal murders. An unsettling theory is that the executions were meant to fumble peace talks between the government and the leader of the P.K.K. who is behind bars. An expert on Turkey at the French Institute of International Relations in Paris, alluded to the possibility that the murders might have been carried out by extreme Turkish nationalists. Whatever the hypothesis, many are concerned that the murders will derail neogiations between the Kurds and the Turkish officials.

Senior analyst for the International Crisis Group, Hugh Pope, stated: “No one should use this as an excuse to end these talks. Because this is a unique opportunity, it is a year without any political elections.” The British representative of the KNK, Akif Rizgar Wan, stated that the killing of Dogan is an example of “terrorism in the middle of Europe.” In response to brutal murders, 200 Kurdish people gathered outside the Information Center for Kurdistan to protest the outrage of Dogan’s death.

These murders come at a time of increased P.K.K. violence, and many are concerned this is not the end of the death count. What theory is more plausible in this situation? How do you think this will affect negotiation talks?