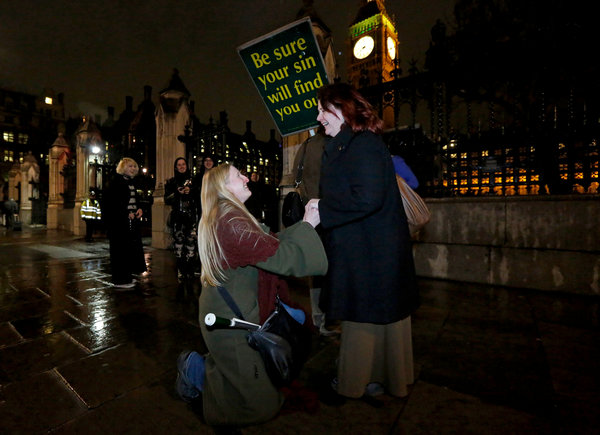 Britain has come one step closer to legalizing gay marriage. A bill to legalize same-sex marriage in Britain cleared a major hurdle on Tuesday, as parliamentarians voted overwhelmingly in favor of the proposals championed by Prime Minister David Cameron. He announced “Today is an important day. I am a strong believer in marriage. It helps people commit to each other, and I think it is right that gay people should be able to get married too.”

After a six-hour debate, the vote in the House of Commons was 400 to 175 in support of the proposed legislation. Unfortunately, with every step forward, there comes a set back.  It appears that more than half of the lawmakers in the Prime Minister’s Conservative Party voted against the bill or abstained.  The bill will now receive more detailed parliamentary scrutiny, and then will head back to the House of Commons for a final vote. If the bill passes this third review, it will head to the House of Lords, where members would also need to vote in favor before it would be signed into law.

The process could take months, but if approved, the bill is expected to take effect in 2015 and will apply to England and Wales.  The bill will enable same-sex couples to get married in both civil and religious ceremonies, provided the religious institution consents. Furthermore, the bill will also let couples that had previously entered into civil partnerships convert their relationship into a marriage.

After the ballots were counted, Cameron acknowledged that “strong views exist on both sides,” but said the result was a “step forward for our country.”