Ecuador Needs to Pay Up 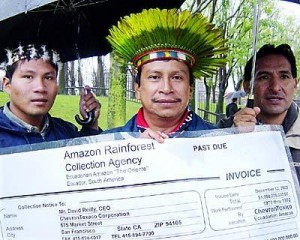 Oil companies usually bear the brunt of criticism when it comes to environmental impacts of their products; see the Exxon Valdez in Alaska and BP in the Gulf of Mexico. However, a recent ruling by an international arbitration panel administered by the Permanent Court of Arbitration at The Hague was decided in favor of energy company Chevron. Under the authority of the U.S.-Ecuador Bilateral Investment Treaty (BIT), the arbitration panel said Ecuador’s failure to abide by a prior ruling needs to be explained to them in detail or else they will be on the hook for tens of millions of dollars.

One of Chevron ’s subsidiaries, Texaco, has been accused of damaging the Amazonian rainforest in Ecuador. In 2012, an Ecuadorian court ruled against Chevron and Texaco, finding them responsible for the damages.  While the companies are appealing, the international panel is reviewing whether the ruling against Chevron/Texaco violated the BIT since an Ecuadorian court was the jurisdiction of the litigation. The international arbitration panel placed a prohibition on Ecuador to prohibit the Ecuadorian plaintiffs from commencing litigation against Chevron in other countries while the investigation and appeal was ongoing. The plaintiffs defied the court and filed cases against Chevron assets in Canada, Argentina and other countries seeking to fulfill the Argentinian judgment. Chevron claims Ecuador has facilitated these litigations while also overlooking the fraud prevalent in their domestic court system which led to the judgment in the first place. The international arbitration panel ruled Ecuador violated international law and may have to pay the costs of judgment against Chevron . This comes after a different international arbitration panel in 2011 awarded Chevron over $96 million dollars finding that Ecuador violated the BIT by ruling on other litigations in the course of the decade long business Chevron has done in Ecuador.

I find this case interesting because it is essentially an international body telling a sovereign nation to interfere into a private litigation-which Ecuador claims under their constitution they cannot do- and quash suits. Treaties designate which choice of law any litigation will use and often designate arbitration as a precursor to any litigation in court. Ecuador may very well have violated the treaty by allowing the plaintiffs to follow suit, but I find it hard to see how a nation can prevent their citizens from filing lawsuits.

1)      Obviously, there are underlying environmental and political issues at play here. Are they the primary reason for these problems?

2)      Should a nation be able to interfere in a judicial system by telling its citizens they cannot fulfill judgments? And should Ecuador be responsible?