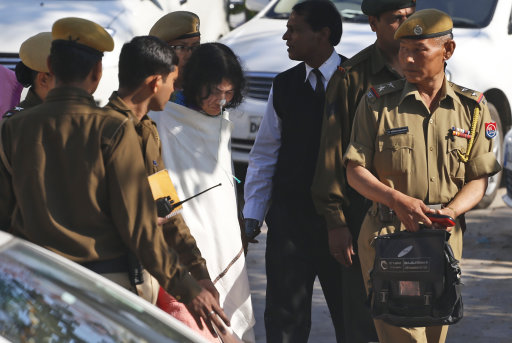 A 40-year-old woman named Irom Sharmila has not eaten a meal in 12 years. She has been on a hunger strike to protest an Indian Law, the Armed Forces Special Powers Act, which suspends human rights protections in areas of conflict.  Under this law, in Indian-ruled Kashmir and parts of the country’s northeast, troops have the right to shoot to kill suspected rebels without fear of possible prosecution. They are also permitted to arrest suspected militants without a warrant. It also gives police wide-ranging powers of search and seizure.

Sharmila was charged Monday with attempted suicide and has been force fed through a tube by authorities.  Sharmila had her last voluntary meal on November 4, 2000. She was arrested three days later and has been force fed through a tube in her nose ever since. Under law, she has to be released once a year to see if she will start eating on her own. When she doesn’t, she is taken back into custody and force fed. She has recently been dubbed the “Iron Lady” by her supporters and has become a rallying point for those demanding the law’s repeal.

The current charges stem from a 2006 protest she attended in New Delhi. Police took her from the protest venue, hospitalized her and registered a case of attempted suicide against her. On Monday, Sharmila pleaded not guilty. She stated, “I love life. I do not want to take my life, but I want justice and peace. I will continue my fast until the special powers act is withdrawn.”

Her trial is set for May 22. If convicted, she faces one year in prison. Sharmila’s supporters are demanding the repeal of the act. “The Indian army should leave Manipur state and authorities should withdraw all the cases against her,” said one protester, Sucheta Dey. The troops are accusing civilians of being insurgents with no credible evidence. Human rights workers have accused Indian troops of using the law to detain, torture and kill rebel suspects, and sometimes even staging gun battles as pretexts to kill.  Women’s rights activists have even said the law allows troops to rape women without fear of arrest or punishment.

The army says it needs extraordinary powers to deal with insurgents. Indian Law Minister, Ashwini Kumar, defended the act, saying it is needed for conflict zones where the burden of proof is not easy to resolve. The number of insurgents has gone up, and extraordinary measures need to be taken.

There are two major issues here. The first issue being the attempted suicide of Sharmila. Should attempted suicide even be a crime that is punishable by jail? Should the government be permitted to force fed this woman for 12 years? Secondly, should the Armed Forces Special Powers Act be repealed or merely modified?  Should the law be allowed at the risk of loss of human fundamental rights?