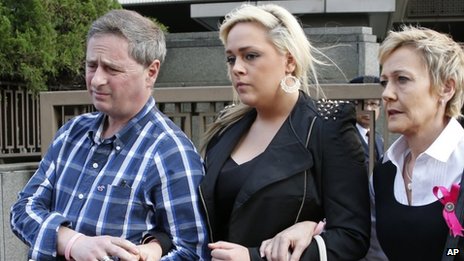 Richard Hinds, a nineteen-year-old American man from Tennessee, has been found guilty of the murder of Irish student Nicola Furlong in Tokyo last May. Hinds was considered a minor under Japanese law when he was arrested, but was tried in an adult court.

He was given a minimum of five years and a maximum of 10 years, with labor. During sentencing, the Chief Judge said Hinds had shown no sign of remorse and had tainted the honor of the victim.

Nicola Furlong, age 21, from Curracloe, County Wexford, was studying in Japan as part of her studies with Dublin City University. Ms Furlong and her friend, whose name is withheld, went to Tokyo to see a concert. After the concert, they met Hinds and his friend James Blackston and went with them to a bar. At some point both of the women were drugged and passed out. Security camera footage presented as evidence at trial showed Blackston sexually assaulting Ms. Furlong’s friend in a taxi on the way back to the hotel. At the hotel, the men got wheelchairs to get the unconscious women to the rooms. Prosecutors said that Hinds strangled Ms. Furlong with a towel to keep her quiet after she regained consciousness. Hinds has denied the murder from the start.

During the trial the prosecution had argued that Mr. Hinds should serve a 10-year prison sentence. Ten years is the maximum a minor can receive in Tokyo.  Last week, a friend of Hinds, James Blackston, was convicted of sexually assaulting the woman Nicola Furlong was with on the night she died.  Blackston is a 23-year-old dancer from Los Angeles. He was ultimately sentenced to three years in prison.

Ms. Furlong’s family was “disgusted and angry by the verdict”. Ms Furlong’s mother Angela said: “Nicola’s life was worth more than that. We still don’t know the truth of what happened in that room but we know Nicola did nothing wrong, we knew that coming out anyway.” Nicola’s sister said she felt let down by the Japanese criminal justice system. “We had so much faith in the Japanese doing justice for us and I don’t feel we got it.”

Do you think that Hinds should have been given a more severe sentence? Does the fact that he must do labor while in prison make up for the fact that the sentence was so minimal? Would you suggest that Japan reformulate their laws dealing with minors for severe crimes such as murder?