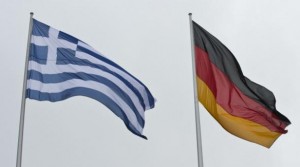 During World War II, Nazi Germany occupied Greece from 1941-1944. In 2012, Germany was the single largest contributor to Greek bailout. This week, both these events came to the fore-front with a war of words from leaders of both countries.

German Finance Minister Wolfgang Schaeuble stated in an interview that the issue of war reparations had been closed years ago and, “Much more important than misleading people with such stories would be to explain and spell out the reform path.” In 1960, Germany paid Greece the equivalent of over $300 million dollars in today’s value as war reparations.

In recent years, leaders in Greece have not spoken out about war reparations, focusing more on their severe financial situation. With Germany one of, if not the, strongest economies in the European Union, Greece could not bite the hand that was keeping them from the brink of financial collapse.  In 2011, the European Court of Human Justice dismissed a case against Germany by four Greeks who were children during the war and survived one of the biggest mass killings by the Nazi regime. This case did not help Greece in their fight to get reparations.

Toward the end of 2012, however, this changed. The Greek government ordered an investigation into whether or not Germany still owes Greece any reparations. The report was finished and sent to Greece’s legal council for review.

On this most recent comment by Germany, the Greek Foreign Minister stated the reparation issue will be decided by international law.

Reparations are an international law norm, with the rights to them enumerated in the Universal Declaration of Human Rights and other international conventions. One definition set forth by the International Court of Justice in the case of Military and Paramilitary Activities in and against Nicaragua (Nicaragua v. U.S.) is this: “reparation[s] must, as far as possible, wipe out all the consequences of the illegal act and re-establish the situation which would, in all probability, have existed if that act had not been committed.”

Do you think Germany has done this is relation to Greece? I understand Germany has essentially been the lifeboat to keep Greece afloat financially, but I see those payments (which help Germany and the EU as much as they do Greece) as a completely different situation from war reparations. It is a point to make things whole after a great atrocity.

Does anyone else find it interesting that the reverberations of World War II are still being felt and intertwined with the issues of today?