Five Year-Old Girl Is Kidnapped and Repeatedly Raped- Is This the Final Push for Stronger Laws Protecting Women in India? 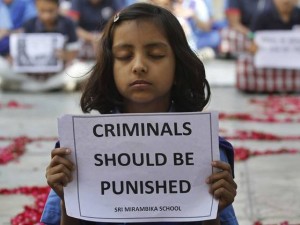 Over the past couple of months, our blog has highlighted the serious problem with crimes against women in India. This problem is further perpetuated by the fact that the Indian government has failed to take significant measures in securing the safety of women and bringing their abusers, and even murderers, to justice. There have been continued protests by women’s rights groups and human rights groups to urge change but this weekend, these groups are now livid. This weekend, Manoj Kumar, a 22-year-old married man, has been arrested for kidnapping and repeatedly raping a 5- year-old girl. He had fled Delhai but was tracked down with the help of cell phone records.

The little girl went missing on April 15 and was found on April 17 by her parents. Kumar apparently lived in the same building as the family. The girl is alive but in critical condition. Reading about the awful things that happened to this girl makes me sick. Even the medical superintendent of Swami Dayanand Hospital, who I am sure has seen some terrible things that have been done to women throughout his medical career, said “This is the first time I have seen such barbarism.” The doctors found pieces of glass inserted in her private parts along with injuries to her lips, cheeks, arms, anus and neck. The doctor said it looked like there was an attempt to strangle her. She was not given any food or water and there are reports coming out that he left her in the house because he thought she was dead. Not only is this story awful enough, there is evidence that the police, instead of putting in their best efforts to find this child, offered her parents 2,000 rupees- about $37- if they would keep quiet about the case.

Once reports of this story came out, protests ensued but were furthered fueled when images of the lead investigator on the case was seen slapping a female protestor in the face.

This blatant disrespect for and inhumane treatment of women is disgusting. Why did Manoj Kumar think he could get away with kidnapping, raping and then leaving this child to die? Why did the police investigator think he could just slap a female protestor in the face? It is this cultural belief in India that women are inferior to men. That men own women and can do whatever they please to them. This belief is even evident in the most recent criminal amendment that was enacted to protect women. The amendment fails to address the biggest problems associated with crimes against women.

Strong laws will help bring change but it all stems from the cultural mindset in India. That needs to change. I commend the brave protestors that fight for women’s rights in India despite the frustration and fear they live in everyday. I hope the world sees their struggle and I hope they never give up because change will come.