A Punk’s Prayer That Has Not Yet Been Answered

Three of the members of the anonymous Russian feminist performance art group were convicted of hooliganism after an impromptu punk concert in Moscow’s main Cathedral.  While one of the members, Yekaterina Samutsevich was released during the appeal, both Alyokhina and Tolokonnikova are currently serving out their two-year sentences for their “hooliganism motivated by religious hatred” while protesting Vladimir Putin.

Recently, Alyokhina was hospitalized after a one-week hunger strike because she was not allowed to attend her own parole hearing.  In addition, last week, both women were denied parole. While Tolokinnikova appeared in court to testify, Alyokhina, who is a mother to a young son, was denied parole when she appealed against the May decision via video link. Tolokinnikova appeared in court to testify

It seems as through these woman are being continually targeted for their political beliefs as the Putin administration has failed to give these women the due process they deserve.

Pussy Riot harps on expressing the values of gender equality, democracy and freedom of expression, and although these values are contained in the Russian constitution, these beliefs are conflict with Russian orthodox traditions.

Although there has been an outcry from the international community, calling for the release of the jailed Pussy Riot members, including celebrities as Sting, Paul McCartney, Yoko Ono, Adele, Elton John, and Madonna, Alyokhina, 25, and Tolokonnikova, 25, still remain behind bars.

What are your thoughts?  Do you believe that the women received/are receiving the proper due process, or do you think that they are being specially targeted for their political beliefs? 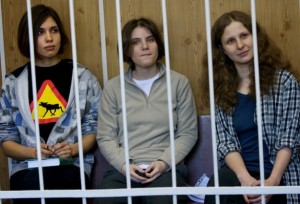