A Look into the Sri Lankan Civil War 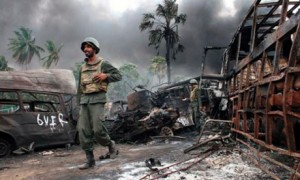 A Sydney, Australia based Public Interest Advocacy group has recently issued a report that is gaining national attention. The group’s International Crimes Evidence Project has investigated the Sri Lankan civil war and has concluded that the crimes committed in the months leading up to the end of the war produced some of the most heinous war crimes that humanity has seen. The United Nations have a scheduled meeting as to how they plan on pursuing these allegations.

The Sri Lankan civil war began in 1983 when an independent military organization attempted to create an independent state. The conflict lasted until 2009. The war had adverse effects on Sri Lanka’s economy and environment and approximately 90,000 were killed. The final five months experienced the greatest amount of casualties. After the war, 300,000 displaced citizens were detained, against their will in camps, drawing international criticism. A grave amount of land mines continue to ravish the country. Since the conflict was non-international and Sri Lanka is involved in major international human rights conventions they are, therefore,  subject to IHL and international human rights laws.

The report contains input from experienced investigators and international law experts that elaborate on the implications of such artillery bombardment, denial of assistance, and extrajudicial abuse and killings. The report analyzes evidentiary material such as photos, video, satellite images, confidential correspondence, witness accounts, and non-government organizational reports. New eyewitness accounts have resurfaced such as one individual who claims that the Sri Lankan government has exhumed mass graves in order to destroy human remains that may provide evidence against them. Other allegations include attacks on civilians, mass executions, enforced disappearance, food, medicine, and water shortages, and child recruitment.  In 2013, the UN Commissioner for Human Rights found that there was no effort by the Sri Lankan government to investigate these allegations, thus recommending its own probe if progress had not been seen by March 2014.

How do you think the UN will handle these allegations? Do you believe Sri Lanka will step up by March and start investigating these war crimes?