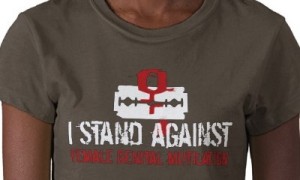 We live in a country that affords women the same rights and protections as a man, as it should be. However there are countries around the world that not only treat their women as lesser beings but also subject them to mutilation. FGM/C or female genital mutilation/cutting is a practice that has been going on for thousands of years and involves partly or completely removing the outer genitalia. Even worse yet, many countries where this barbaric practice still goes on perform the procedure with no anesthesia, in horrible conditions, and with nearly any sharp object they can find. Someone who heard about this would think there is no way this is currently being performed anywhere in the world but unfortunately they would be far from correct. Millions of girls have been forced to undergo this practice and countries like Egypt and many parts of Africa carry on this horrendous legacy. One of the oddest things about all this is that no one can really pinpoint the history or origination of this practice, which would beg the question why in the world is it still being performed? In 2012 the U.N passed a resolution that was not legally binding but pressed the member states to abolish the practice. Fortunately, many western countries such as Sweden and the U.K banned the practice years ago. One may be surprised to hear that it was not till 1997 that the U.S also joined in on making the operation illegal. The U.N has recently been taking further steps to help push ridding countries of this procedure like encouraging and working with religious leaders and civil society organizations thereby raising awareness of the prevalent risks that come with performing this grotesque operation. In this “modern” world of ours there are hundreds of thousands of girls around the world who are at risk of having a knife taken to them and being mutilated in unimaginable ways and this is simply unacceptable. Worldwide awareness must be raised and FGM/C must become a thing of the embarrassing and ignorant past as quickly as possible.