From Football to Forced Takings: The True Costs of Hosting the World Cup 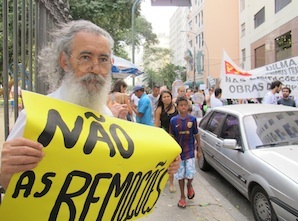 The World Cup and Olympics will be making their way to Brazil in 2014 and 2016 leading to the prospect of millions of tourists for the largest South American country. In order to build the stadiums and facilities required to host the events, Brazil engaged in systematic government takings through eminent domain. Under Brazilian law, expropriation can only be carried out “in cases of public utility (Decree Law 3365/41) or social interest (Law 4.13 2/62).”

While the Olympics and World Cup could theoretically fall under both categories, since roads and infrastructure will need to be built and because of the potential monetary impact of hosting the games, many citizens express their outrage at the lack of fair compensation.  In 2010, compensation paid per home in Rio De Janeiro averaged $16,000, which is not enough to find another home in the city, as Rio’s real estate is “among the most expensive in the Americas.”

Many of the families that are being removed after spending decades building a life for themselves in the favelas of Rio de Janeiro are given the option of “a home in a federal housing project, a stipend of up to $230/month to rent a home they find themselves, or compensation for their house.”  However, most residents, advocates and legal authorities believe their rights are being violated and they are not being compensated fairly.  Under the guise of “just compensation” the Brazilian government uses the doctrine to ensure there is no excessive compensation given to the expropriated party.

But is the right to host the Olympics or World Cup really an event worth taking private property?  The games are likely to boost tourism; however, a lot of the vendors that may benefit from the increased traffic are the ones that are going to be moved.  Further, after the end of the respective events, the tourism will die down and return to the level it was prior to the games.  It is my opinion that the few months of increased exposure is not worth the hassle, especially if there is unfair compensation.