Officer, Are You Above International Law? 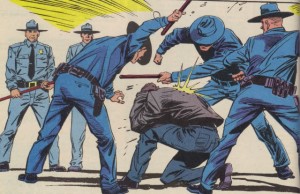 The common occurrence of unnecessary police violence is not a new notion in national or international news and, unfortunately, police brutality is often slipped right under the rug with a mere slap on the wrist. On September 30, 2014, however, the European Court of Human Rights (ECHR) held unanimously, in the case of Anzhelo Georgive v. Bulgaria, that Bulgaria violated Article 3 of the European Convention for the Protection of Human Rights and Fundamental Freedoms. This case involved police brutality that occurred during a special police operation initiated by the Varna Prosecutor in Bulgaria. The operation was a search and seizure for illegal software from the applicants Internet Company.

The key issues before the Chamber were, whether the brutal treatment and excessive force (including electro shock weapons) the officers used against the employees during the search was necessary, and whether the refusal of the Bulgarian prosecution to open criminal proceedings against the officers was appropriate.

The applicants filed complaints to the Varna Prosecutor with medical certificates to corroborate the allegations of brutal treatment during the search, which provided evidence of second-degree burns from the use of electro-shock devices, along with abrasions and bruises to the chest and face of the applicants; some applicants were repeatedly electroshocked after they were already handcuffed.

The prosecution refused to open criminal proceedings against the police department stating, “the officers had not exceeded their statutory right under section 72 of the Ministry of Interior Act to use force, as they had been faced with refusals to obey their orders.” Article 72 of the Ministry of Interior Act states that a police officer “could use force and auxiliary means for restraint . . . only where absolutely necessary.” It seems that this terminology allots police officers broad discretion in deciding when to use force. For example, does the phrase mean absolutely necessary to obtain the objective of the operation, or does it mean absolutely necessary regarding a life threatening situation, or a matter of self-defense?

The ECHR found the government failed to meet its burden to show that the applicants were uncooperative, or that the force was necessary. The court ultimately held that the injuries caused by the officers were “sufficiently serious to reach the minimum level of severity required for a complaint to pass the threshold of Article 3,” as Article 3 asserts, “No one shall be subjected to torture or to inhuman or degrading treatment or punishment.” Further stating that Article 3 “enshrines one of the fundamental values of a democratic society” and “makes no provision for exceptions.”

I applaud the ECHR for making a statement against police brutality, as a violation of human rights. Of course police officers must have the ability to protect themselves in dangerous circumstances, but I think the discretion to use excessive force should be more strictly limited, and these limits should be more readily enforced. Do you think this ECHR decision opens a door for redress to victims of police brutality? Should the issue of unwarranted police aggression be handled in an international forum, or should police violence only be a matter of domestic concern? What better measures can implemented to put an end to police brutality?