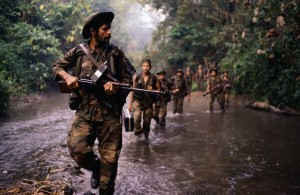 The decision to arm select Syrian rebels flies in the face of currently established International Law . . . though an argument may exist for a newly minted exception.

According to the New York Times, new legislation passed by Congress, drafted as an amendment to a routine bill to keep the government funded past September 30, grants the president authority to train foreign forces to confront the Islamic State, including Syrian rebel forces embattled in their conflict against the Assad regime.  On its face, this set of facts resembles exactly Case Concerning Military and Paramilitary Activities in and Against Nicaragua (Nicaragua v. United States), decided by the International Court of Justice (I.C.J.) in 1986.  There, the I.C.J. held that the U.S. decision to arm the opposition to the Sandanista government in Nicaragua violated the principle of non-intervention under customary international law.  The I.C.J. so held in spite of the U.S. assertion of its right to collective self-defense.

Ashley Deeks, a Law Professor at the University of Virginia, ruminated on NPR as to the legality of arming Syrian rebels:

. . . if you did use force against ISIS, under collective self-defense, I think it’s perfectly justifiable to arm rebels who are fighting ISIS. Where it gets a little bit more complicated is where there’s rebels maybe fighting multiple groups, including ISIS, but maybe also including Assad’s government.

Arming Syrian rebels in direct combat with sovereign Syrian forces directly violates the principle of non-intervention unless the U.S. can find an alternative justification.  One such alternative, the “humanitarian principle,” provides a potential exception to the principle of non-intervention.  The principle, as articulated by Judge Antonio Cassese, provides for resort to armed force “under certain strict conditions” involving “gross and egregious breaches of human rights involving loss of life or hundreds or thousands of innocent people . . . amounting to crimes against humanity . . .” resulting from “anarchy in a sovereign state.” The Core Principles enumerated in the Synopsis of Responsibility to Protect assert a “Just Cause Threshold” that must be met prior to a warranted humanitarian intervention.

To be warranted, there must be serious and irreparable harm occurring to human beings, or imminently likely to occur, of the following kind:

A. large scale loss of life, actual or apprehended, with genocidal intent or not, which is the product either of deliberate state action, or state neglect or inability to act, or a failed state situation; or

B. large scale ‘ethnic cleansing,’ actual or apprehended, whether carried out by killing, forced expulsion, acts of terror or rape.

Both Cassese and the Responsibility to Protect agree in principle that humanitarian intervention is justified only as a last resort, and only in the event of Security Council inaction, rejection, or deadlock.  Assuming the conflict in Syria fits that bill, however, there is a further requirement that the engagement must be proportional in nature.

If arming Syrian rebel forces such as the Free Syrian Army solely to combat ISIL is justifiable due to Syria’s inability to act, that inability to act is predicated directly upon the actions taken against the Assad Regime by the rebels themselves, creating a dubious Catch-22.  If the arming of Syrian rebel forces is intended instead to combat the large-scale loss of life perpetrated by the Assad Regime, however, the arms are likely justifiable under the Responsibility to Protect, provided it has in fact “crystallized” into a principle of customary international law.

Has the Responsibility to Protect “crystallized” sufficiently to be such a principle, and is arming the rebels in Syria thus justifiable?  Or may the United States avoid liability under other principles?  Share your thoughts in the comments below.

Gareth Evans and Mohamed Sahnoun, Co-Chairs, The Responsibility to Protect: Report of the International Commission on Intervention and State Sovereignty (2001).