Political Paralysis in Bosnia and Herzegovina 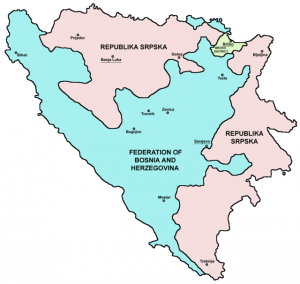 In 1995, the Dayton Agreement was signed, putting to rest the three and a half long Bosnian War. As a result, the State of Bosnia Herzegovina was set as the Federation of Bosnia-Herzegovina (Federation), mostly Bosniak and Croat, and the Republika Sprksa (RS), mostly Serb. The Agreement envisioned a single country with a loose centralized system governing two entities. However, the Federation wishes for the state to be centralized and RS believe that they deserve independence, presumably to join Serbia.

Is there a lack of accountability regarding the Agreement and its aftermath? The United States, alongside several global power, led the peace conference that gave way to the construction of the Agreement, effectively endorsing its spirit. But that spirit has seemingly abandoned the document and the country. For one, the original Dayton Agreement disappeared in 2008. In 2009, a certified copy took its place.

The conflict seems to be ethnically motivated: a portion of the population claims it does not belong to the country and claims it deserves to leave.

Does the international community have an obligation to mitigate what it effectively failed to facilitate? Bosnia is one of Europe’s poorest countries. Unemployment rate is at 44% and the country suffers from infrastructure deficiencies that are emblematic of the country’s crumbling stability.

Should the RS be granted independence to secede and join Serbia in an effort to resuscitate what’s left of the country? Why hasn’t RS garnered international attention as an independent state?