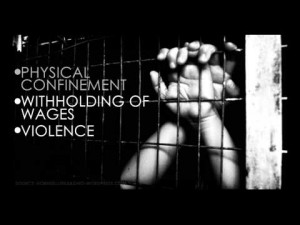 The United Arab Emirates (UAE) is one nation plagued with abuse of trafficking in forced labor. While the UAE does consider forced labor a crime, its anti-trafficking efforts of shelters and media campaigns are directed predominately at sex trafficking.

The UAE has an estimated 7.3 million migrant workers in the country creating a necessity for immigration policies and labor laws to protect these workers rights and to reduce trafficking. The UAE has a visa sponsorship system that has guidelines for forced labor but it explicitly excludes migrant workers. This sponsorship program known as kafala, matches domestic workers to individual employers and the workers cannot move to another job without their employers consent.  This system creates trafficking because of the deceptive recruitment practices, exploitation in working conditions, and employers are known to steal the workers passports.

Human Rights Watch interviewed 99 domestic workers in the UAE, some of whom were trafficked, with women reporting numerous abuses such as recruiters making false promises or not paying wages on time. In addition, many employees took these women’s passports and wouldn’t let them leave the homes where they worked. Many women reported instances of psychological, physical, and even sexual abuse along with reports of being deprived of food and water.

This type of treatment towards workers is startling as workers should not be deprived of basic human rights such as having safe working conditions, livable wages, as well as simply being given food and water. In 2014 the UAE elected to the International Labor Organization’s Governing Body and is a donor to the U.N. anti-trafficking initiative so it needs to strive to make working conditions better for its citizens.