“Tase me, bro?” An international perspective on the TASER 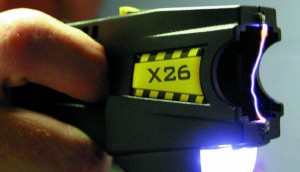 Steve White, Head of the Police Federation of England and Wales, announced today on BBC Radio 4 that he wants to put a TASER in every front-line officer’s pocket.  White is not alone in pursuing the standardization of the TASER in Europe; Italy’s commissioni Giustizia e Affari costituzionali della Camera dei Deputati (commission for Justice and Constitutional Affairs of the Chamber of Deputies) has also recently moved to enact a similar measure into law. TASER International’s website claims that 625,000 of its devices, used by nearly 17,000 agencies in over 100 countries, saving a life from what would otherwise be a lethal use of force by law enforcement every 30 minutes.

While White’s proposal is by no means a cure-all — TASERs can be ineffective in close quarters and Amnesty International has cautioned that they are not as ‘non-lethal’ as the stun gun industry might claim — they can be an effective method for saving lives when police receive training in correctly prioritizing their use.  In 2010, for instance, a grand jury in San Mateo, California concluded that TASER devices can be a use of force alternative to the lethal force of a firearm. In doing so, the grand jury noted the Sheriff’s Department modified its policy to require a higher threshold for the deployment and activation of TASER devices by its deputies by placing their priority lower on the ladder than “specialty impact munitions” (e.g. rubber bullets or 12-gauge bean bags), but higher on the ladder than the use of lethal force.

Interpol has received similar guidance.  In a report shared with the intergovernmental police organization, the Canadian Police Research Centre (CPRC) noted several medical tests and conclusions conducted in the US, Canada, the UK, and Australia.  The study noted that “Definitive research or evidence does not exist that implicates a causal relationship between the use of CEDs and death,” citing “excited delirium” as a more common cause of death from TASERs than cardiac arrest.  Additionally, a Nevada study cited by the Centre noted that the TASER is “well below the level established as ‘safe’ by the federal [U.S.] government and International European standards in approving such devices as electrified cattle fence, and the risk of cardiac complications is low.”

In an interview with the Huffington Post in December of 2014, Rick Smith, the CEO of TASER International, suggested that TASER devices could have saved lives in recent police activity that resulted in the deaths of Michael Brown in Ferguson, Missouri and Eric Garner in Staten Island, New York:

[Ferguson] would have been the perfect situation for a Taser. Now, I can’t go back and say that [Officer Wilson] would have used it. I wasn’t there. But, big, unarmed, aggressive people, that’s the number one use case for Taser devices. We want to get a Taser on every cop’s belt so that they have every option to use before they have to go to a gun.

Should there be an international mandate to require the use of TASER and other non-lethal devices prior to the use of lethal force by police? Are TASERs an effective method for controlling out-of-control arrestees and suspects, as TASER International and some international law enforcement bodies have suggested?  Share your thoughts in the comments below.

Natalie Pace, Could Tasers and Cameras Have Saved the Life of Michael Brown? Huffington Post (Dec. 5, 2014).