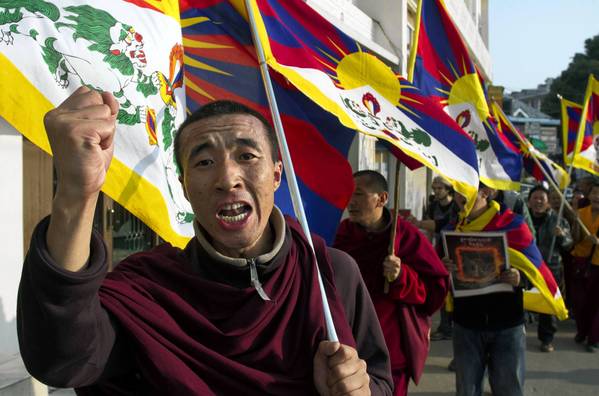 This past Thursday, 18 year-old Jinpa Gyatso killed himself after setting himself on fire outside a monastery in Huangnan in protest of China’s control over Tibet. These self-immolations have occurred regularly since March 2011 but four others have joined in protest just this past week. On Wednesday, 23 year- old, Tamdin Tso, set herself on fire in her family’s pasture, leaving behind her 5 year-old son. Also on Wednesday, three monks, two of them ages 16 and the other 15, protested for Tibet’s freedom and for the return of the Dalai Lama before self-immolating themselves. The 15 year-old died at the scene while the other two were rushed to the hospital.  A total of 69 Tibetans have set themselves on fire since February 2009, which has resulted in 54 deaths.

News sources say that these protests are in response to the opening of the 18th National Congress of the Communist Party of China, which is a major political event to appoint new leaders of China. The relationship between China and Tibet has been a tumultuous one. For many years, China has had some influence over Tibet but took direct control in 1959. The takeover came after a final uprising by the people of Tibet in opposition against China. Immediately after China seized Tibet, Tibet’s Buddhist spiritual leader, the Dalai Lama, fled to northern India where his supporters have set up a government in exile. Since then, Tibet has continued to protest and fight for its freedom.

International organizations like the United Nations, have urged China to address Tibetans’ grievances which have led them to these extremes, but China has routinely denied Tibetan claims of repression and have accused supporters of the Dalai Lama of encouraging these self-immolations.

Can anything be done to stop these self-immolations? Should an international organization intervene?