“Things That Can Never Happen in America” 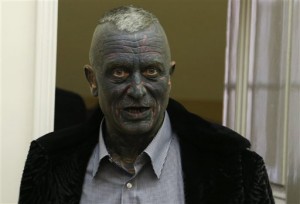 This is the first year that the Czech Republic will elect a President. While this position is mainly ceremonial, since the nation is and will continue to be run primarily by the prime minister, candidates are receiving a great deal of attention – one candidate in particular. Vladimir Franz, tattooed from head to toe, is third in the polls in the Czech presidential election.

The victor will not be the Czech Republic’s first president; the country’s two former presidents, though, were elected by Parliament. After facing allegations and charges of corruption, the legislature decided to pass the election process on to the public.

While Franz is not well-liked by the incumbent, President Vaclav Klaus, Franz is particularly popular among young voters. A composer and a professor at Prague’s Academy of Performing Arts, Franz successfully gathered 88,000 signatures while petitioning for his candidacy. His platform focused on battling corruption, and strengthening education and morality.

During a recent interview with British Channel 4 news, Franz commented on his appearance: “Tattoos are an expression of free will, which do not interfere with the freedom of others…To me, it is also an expression of the permanent decision to stand up for my choices, good and bad. My tattoo is the result of a long-term sophisticated conception, not a sudden movement of the mind.”

While his outward appearance undoubtedly evokes varied expressions of criticism and acceptance, Franz’s attitude left me thinking about more than just his chance of winning the election. His mantra is brave and striking: “To rate a human being only according to appearance – no matter if it was given by nature or voluntarily by himself – is a sign of superficiality and arrogance at the same time.” As the writer of the article suggests, I doubt whether a candidate like Franz would ever run for office in the United States. While the media plays a large part in focusing our attention on looks, attire, and attractiveness, we cannot place full blame on the media. We too are obsessed with “what’s on the outside,” rather than the inside. After all, it is well known that too many Americans make their voting selections based upon physical attributes, sometimes hardly paying mind to a candidate’s platform, experience, background, or qualifications.

With this said, I agree with Olga Khazan from the Washington Post. Not only would a candidate like Franz never win an election in the United States, no such candidate would ever attempt running for office.