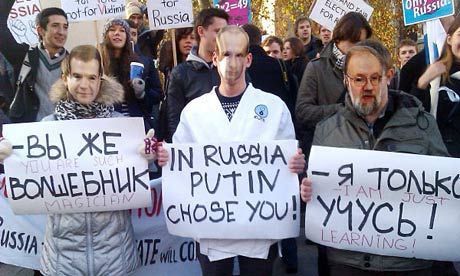 Three recent events have marked a turning point in relations between the United States & Russia: Russia granting Edward Snowden asylum, the anti-gay law and its effect on the 2014 Winter Olympics in Sochi, and President Obama canceling his bi-lateral meeting with Russian President Vladimir Putin.

All three events signal a backlash toward the United States, and more significantly, the “West” in general. Russia historically has set themselves apart from the West and creating, in their minds at least, a distinct culture, unlike any other nation in the world.  They are not a part of Eastern Europe, they are Russia. As much as tensions have died down since the “Fall” in the early 1990’s, what these events signal is really just a renewed interest in Russia being its own beast and setting up a direct conflict with the United States to combat what some have called a “decadent” West  that will cause the collapse of Russian civilization.

President Putin’s rise has centered on bringing Russia back to prominence, by subjugating the West, the dissenters (Pussy Riot) and those he felt could be used as scapegoats (people who engage in “non-traditional sexual relationships”). This is clearly epitomized by the youth group Nashi, translated to “Our”, who used xenophobic and racial attacks to support Putin and his government in the early 2000‘s. Fast forward to 2013 and Russia is back on the largest international stage to showcase “Our Russia”: the Winter Olympics.

The recent law banning “homosexual propaganda” is argued by the law’s sponsor, Elena Mizulina, to combat Russia’s moral and demographic decline. While it is true that the number of children born in Russia is decreasing, the reality is almost every nation outside the developing world faces the same exact problem. Promoting a “traditional” family unit creates more supporters. With the recent rejection of the Defense of Marriage Act by the United State’s Supreme Court and the legalization of same-sex marriage growing around the world, it is hard not to see Russia’s move as using demography to legitimize a political move, or more specifically, an act to set yourself apart from the others. Human rights be damned.

Edward Snowden presents a similar example. Granting him asylum was Russia using a tenet of international law to essentially flaunt its power to the U.S. It forced President Obama’s hand to cancel the bi-lateral meeting and it also showed other nations, such as Venezuela and Ecuador, that there is another mentor they could follow. Now comes news reports that Snowden was in communication with Moscow, and perhaps even stayed at the Russian embassy, while still in Hong Kong. If anything, this shows a game being played, one in which Russia is positioning itself against the United States.

What is to be gained is obvious, but the losses are substantial. Human and civil rights, international relations, and a status quo.