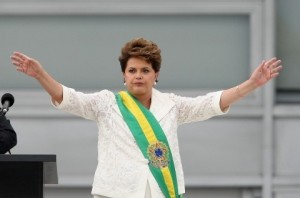 Today, the Obama administration received possibly the biggest blowback yet from its spying regime, as Brazil’s president, Dilma Rousseff, indefinitely postponed a state visit to Washington that was scheduled to start on October 23. Ms. Rousseff cites allegations that the National Security Agency (NSA) has intercepted emails and communications from her, her staff, and the semi-public oil company, Petrobras, as the main reasons for cancelling the visit. She attributes these allegations to documents leaked by expatriate Edward Snowden. Rousseff’s state visit would have been the first by a Brazilian president since 1995.

In a news conference today, Press Secretary Jay Carney tried to save face by presenting the cancellation as a bilateral decision that Obama and Rousseff “made together,” but the evidence suggests that Obama had little say in the matter. Ms. Rousseff has made it clear that the alleged espionage has become a growing source of tension, stating, “[t]he illegal…interception of the communications and data of citizens, companies and members of the Brazilian government constitutes events of the utmost gravity and are a threat to national sovereignty and individual rights.”

The NSA’s spying has not only become an international source of tension, but has also strained domestic support for the Obama administration. Many Americans find  themselves questioning whether the government has legal authority under the 4th Amendment to collect personal data on such a widespread, non-particularized basis. One justification can perhaps be found under the third-party doctrine as formulated in Smith v. Maryland, 442 U.S. 735 (1979), in which the Supreme Court held that government use of a pen register installed on telephone company property was not considered a “search” under the 4th Amendment, and thus no warrant was required. A pen register allows incoming and outgoing telephone numbers to be recorded, but does not record the actual content of the conversations. The Court held there was no reasonable expectation of privacy for the telephone numbers because “petitioner voluntarily conveyed numerical information to the telephone company.” Id. at 744. Therefore, by voluntarily disclosing the information to a third party, its 4th Amendment protection is lost. An argument can potentially be made that the metadata the NSA collects is analogous to the collection of telephone numbers in Smith. However, it is unclear whether the NSA actually limits itself to metadata. In the case of Brazil, it appears that personal content was perhaps also intercepted.

Justification for the NSA’s spying is often couched in terms of the trade-off between liberty and security. Do you think the NSA’s spying has made us safer, or has it brought about greater negative consequences by alienating our international friends and allies?