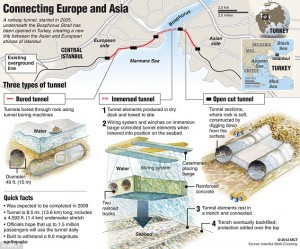 This past week, Turkey proudly unveiled the Marmaray Tunnel Project to the world. Marmaray is a modern engineering marvel and the world’s first underwater rail project between two continents. Istanbul, which spans Asia and Europe, is now successfully connected by a thirteen-kilometer stretch of concrete tubing 60 meters below the Bosphorus Straight. Construction took over ten years to complete and cost Turkey $2.8 billion dollars. The tunnel was completed with the help of the Japanese company Taisei, with much of the funding coming from the Japan Bank for International Cooperation.

Government plans for a rail tunnel under the Bosphorus date back to 1891, when Ottoman Sultan Abdulhamid ordered French engineers to create the blueprint of a submerged tunnel. Obviously, these plans were never executed, but the historical significance of building a connection between Europe and Asia is deeply rooted in Turkish culture. Prime Minister Erdogan noted this historical sentiment at the unveiling ceremony and stated, “Today we are realizing the dreams of 150 years ago, uniting the two continents and the people of these two continents.” However, not everyone in Turkey shares Erdogan’s vision of an unapologetic need for Turkish modernization.

Ironically, the opening of the Marmaray tunnel coincides with the 90th anniversary of the founding of the modern Turkish Republic, the creation of a secular government. Erdogan, who is very popular domestically and has been in power since 2003, made the modernization of Turkey a main goal during his tenure in power. However, there has been much resistance from the younger generation to his increasingly authoritarian and conservative style of government. This past summer, the large protests in Taksim Square were in response to Erdogan’s planned renovations of a very popular green space near Taksim. Though the government eventually dispersed the protesters after weeks of heavy fighting, the conflict represented the great disconnect between civil modernization and modern social values.

The entire Marmaray project was delayed five years due to the discovery during excavation of Byzantine relics dating back 8,500 years. While archeologists and UNESCO voiced their concern with regards to the disruptive nature of the tunnel, Erdogan was not sympathetic and charged ahead with the project after the artifacts were removed. Erdogan has been accused of bypassing city planners to advance his modernization goals.

Istanbul is home to over 15 million people and the government hopes to reduce car traffic by 20% with the completion of the Marmaray Tunnel. Erdogan also has plans to construct a 50-km canal though Istanbul, a third airport, atomic power stations, and a third bridge over the Bosphorus.

While the intentions of Erdogan and the Turkish government make sense, should UNESCO and prominent archeologists continue to voice their concerns? Should action be taken at an international level?

Istanbul is an ancient city and was the capital of the Ottoman Empire, should accommodation for modernization be made, or should the historical significance of the metropolis be preserved?

It must be noted that Turkey is a country prone to intense earthquakes, and the Marmaray is only 20km from the active North Anatolian Fault. Do you think such quick modernization should be stifled by geological realities?