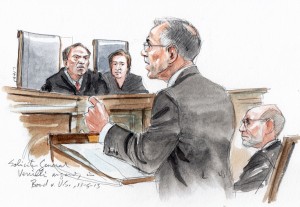 “…there can be no doubt that chemical weaponry is at the forefront of…foreign policy efforts right now…It would be deeply ironic that we have expended so much energy criticizing Syria, when if this Court were now to declare that our joining or creating legislation to implement the treaty was unconstitutional.”

Today the Supreme Court heard oral arguments for the case of Bond v. United States. Bond’s is a case that involves much more than a love triangle and failed attempt at revenge. This case raises various questions of international importance.

It has brought into light questions as to how the United States carries out its international obligations. More significantly, this case brings out the impact of domestic dealings of chemical weaponry and its unavoidable effects on the rest of the world; questions that the Justices did were not apprehensive to raise. “Some of the Justices”, writes Lyle Denniston in the SCOTUSblog, “openly canvassed ways to cut back, perhaps sharply, on the national government’s power to negotiate or to implement global treaties.” Questioning Mr. Clement’s argument on the constitutionality of the United States’ ratification of the Chemical Weapons treaty one of the first questions by the court was about the international effect of chemical weaponry.

At the forefront of this case is a concern about placing limits on national treaty power. This is a case about the federal government’s reach on the individual, yet (and I dare say unavoidably) the situation in Syria came up. As the situation in Syria highlights, there is a question of where to draw the line. The Chemical Weapons Convention differentiates between “peaceful use” and “warlike use” of chemical weaponry. The prosecution of Bond is directly tied to this question. In addition, as General Verrilli pointed out, it is an ongoing issue that has also come up with regards to the Nuclear Nonproliferation Treaty.

This is not going away. It needs to be resolved. This issue centers on individual nations’ domestic implementation of international treaties.

The Chemical Weapons Convention (an open-ended treaty, Justice Breyer called it) has been a great start to placing accountability. It has implemented and established great international cooperation for the disposal of chemical weapons. Nonetheless, as the situation in Syria demonstrates, more needs to be done.

Do you think individual nations should have the ability (the sovereign right) to regulate and conduct their own chemical weapons use and disposal?

Taking into consideration that chemical weaponry is at the forefront of current international efforts, do you think it is more appropriate to have and prioritize international collaboration?