Thomas Neumann is Master of Laws and former participant in the 14th Willem C. Vis International Commercial Arbitration Moot. He published his first CISG related article as a master student in the Vindobona Journal. While writing his PhD dissertation he launched the CISG Nordic research database (cisgnordic.net) comprising material relevant to the interpretation and application of the Convention in the Nordic countries. Thomas Neumann was awarded the PhD degree in 2011 for his dissertation An Exploration of Article 80 CISG. Aside of his current position as Associate Professor at the Department of Law at Aarhus University he is a lecturer at various tertiary educations.

Is the Albert H. Kritzer Database telling us more than we know?

The article develops the idea that the success of the CISG is tied to the domestic courts’ ability to promote uniformity by observing certain sources in a transparent manner, and at the same time leaving out unwarranted factors when deciding disputes. It is considered, whether the data contained in the Albert H. Kritzer Database can be used for a general survey rather than engaging in the collection of case law anew. The article includes a cursory study demonstrating both the ability and limitations of a systematic survey of the success of the Convention.

The idea of systematically surveying the use of the CISG developed during my studies as a doctoral student at Aarhus School of Business (now Aarhus University). Here, I came across an article written by Professor Dr. iur. Ulrich Magnus in the book CISG Methodology (Sellier, 2009). Ulrich Magnus discusses the risk and possibility of domestic courts applying a political interpretation of the CISG, for example by systematically interpreting the Convention in favour of the local industry. This made me wonder what the actual win/loose ratio for CISG-relevant disputes between a foreign and a local industry in each CISG contracting state was. The idea developed, and I realised that the issue could be used to say something about the success of the Convention in the light of the goal of uniform application. However, it was first necessary to investigate if the Albert H. Kritzer Database contained enough decisions by domestic courts to base such a systematic survey on. 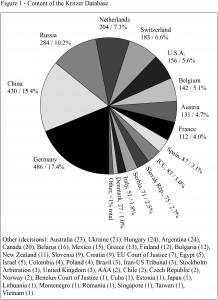 The idea developed further during my task of conducting lectures in international sales law as part of my home university’s ‘Economics and Business Administration’ education. Here I realised that my business-focused students where rightfully less interested in knowing single good and bad case law examples of the Convention’s application, if the cases did not express the usual behaviour of the courts. Businesses cannot use single case law examples for much more than educational examples of how to interpret the Convention correctly, since they are never going to argue a case in court. Businesses and business students should know for example to which extent the courts of CISG contracting states actually systematically favour the local industry, since it enables them to act accordingly on a more informed basis.

The idea finally developed into a wish to survey the courts’ ability to observe the Convention’s article 7, which includes other criteria than just the prohibition of discriminating against the foreign industry. When I received a 3-year research grant by the Danish Council for Independent Research and Aarhus University, I took the chance to systematically survey 13 countries in regard to the criteria of success set out in the article. This task would not have been possible to carry out without being able to rely on the great collection of case law in the Albert H. Kritzer Database. The database provides access to important case law examples for understanding particular provisions and issues of the Convention, but it also contains the opportunity to generalise on the domestic courts’ ability to promote uniformity in practice. Therefore: Yes – the Kritzer Database is telling us more than we currently knew, which can help shed new light on the Convention, but it also has its limitations.