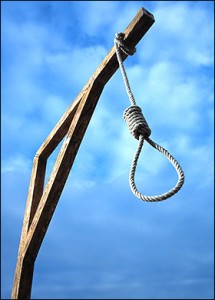 Special rapporteurs, appointed by the Geneva-based UN Human Rights Council, released a report revealing alarming number of public hanging executions that Iran has administered. In the past week 33 people were hanged as punishment for their crimes. More alarming still, is the fact that most of those who were hanged were result of committing drug related crimes. There is a large number of U.S citizens who think the U.S government administers overly harsh punishments for drug crimes and yet we are far from hanging people for crimes such as possession. Many say that some of the hangings have been retaliation for murders committed by certain groups upon others. However, the UN Commission on Human Rights (UNCHR) passed a resolution, as far back as 1999, calling on all states that still maintain the death penalty to progressively restrict the number of offenses for which it may be imposed with a view to completely abolishing it. Retaliation is not one of the crimes that made the list for the death penalty and Iran is currently in outright breach of this resolution. This is much more than a matter of breaching international law. This is a matter of civil rights and the sanctity of humanity. The penalty of being hanged to one’s death is archaic and dates back to medieval times. It is an act that should have been buried along with slicing people’s heads off with a guillotine. Many times it can take 10-20 minutes for a person to die from hanging. The thought of having a person, criminal or not, hanging from a noose for 20 minutes fighting for the slightest bit of air is gruesome to say the least. It is a matter all countries, not just Iran need to remember before administering this penalty for something as minor as a drug offense.
Sources:
UN.org
Amnestyusa.org