Go ask for money somewhere else 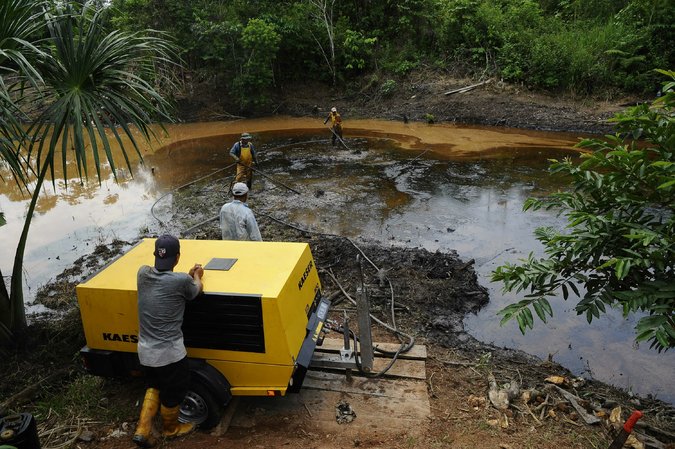 Many of you may or may not be familiar with egregious actions of Chevron and the Texaco Oil company in the country of Ecuador. In 1964, the Republic of Ecuador granted to a Gulf Oil subsidiary and to TexPet, an indirect subsidiary of Chevron/Texaco, a concession to explore for and produce oil. The government of Ecuador later joined this concession by buying up approximately 25% of the ownership control. A few years later, The government bought up Gulf oil’s share becoming the majority owner of the concession but TexPet (Chevron Subsidiary) remained the operations controller. As the concession came to an end in the early 1990’s, the government and TexPet negotiated an arrangement to clean up the oil spill they made on Ecuadorian land. The arrangement called for clean up according to ownership percentage. After TexPet cleaned up its respective part, the government attempted to clean up its part but was negligent in doing so and the spill effects still exist. The republic of Ecuador and the citizens affected by the oil spill brought suit against Chevron for damages. The Ecuadorian courts after decades of litigation awarded the citizens of Ecuador a judgment for approximately 19 billions dollars but it was later reduced by the highest Ecuadorian court to 9 billion dollars. After Chevron refused to pay the award because they claimed they no longer conducted any business in Ecuador, the Ecuadorian plaintiffs sought to enforce the judgments in Canada, United States, Brazil and Argentina.

Although this is a very complicated case with decades of litigation, it seems to me that in the end there is victims who have suffered from the oils spills caused by the Ecuadorian government and Chevron’s subsidiary. The 500-page decision issued at the beginning of this month by Judge Kaplan seems to be completely shutting the door on victims of a political game played by the Ecuadorian government and the Oil Empire of Chevron. Although the actions of plaintiffs counsel are tainted – with corruption, bribery, and fraud – the victims should be entitled to receive some sort of compensation for their losses due to the ambitions of oil industries.

Does anyone believe that the victims of an oil spill such as this, should be allowed to recover in the United States on a judgment issued by a foreign court involving a United States corporation?