Curfews for Syrians, Freedom for Others 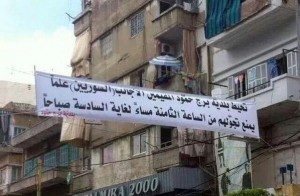 Lebanese municipalities are imposing local curfews on Syrian refugees. This practice has no other than discriminatory purpose. Officials are trying to shield this purpose by saying that imposition of such curfews improved security and orderly conduct, but none of this is true according to the Human Rights Watch. None of the municipal officials were able to state the real goal of more than 45 curfews, which usually direct “foreigners” or “foreign workers” to be home by 8p.m. These practices are in direct violation of international law.

“Anyone lawfully present in a country has the right to freedom of movement within that country.”  Yes, this right does not necessarily apply to children in all circumstances, not even in the United States (Qutb v. Barlett), but it certainly applies to adults. “This principle is enshrined in Article 13 of the Universal Declaration of Human Rights and Article 12 of the International Covenant on Civil and Political Rights, which Lebanon has ratified.” Therefore, imposing curfews on Syrian refugees only is obviously discriminatory.

Not only are the Lebanese municipalities violating Universal Declaration of Human Rights, but they are also fostering a hostile and dangerous environment. This fact is apparent from the retaliatory practices against the Syrian refugees who are out in public after the set hours. Human Rights Watch reports, that one man was brutally attacked by a group of civilians, who stabbed him three times for going out shopping after curfew hours. They told him that he could not go out at night because he is Syrian. The victim is currently hospitalized due to his serious condition.

So why is the Lebanese government watching without interference? Curfews are not grounded in Lebanese, or international law. Furthermore, it is quite clear that local police is not capable of enforcing the curfews, and protecting Syrian refugees from public retaliation at the same time. What actions should be taken to put an end to such invidious discrimination? Who is responsible for preventing infringement on human rights of Syrian refugees?