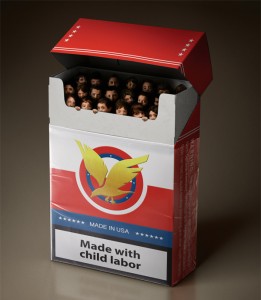 Under a strikingly ominous exception to traditional US child labor laws, children as young as 12 years old are permitted to work unlimited hours on farms, with parental permission, so long as it does not interfere with school hours. Aside the apparent moral dilemmas with such exceptions, more troubling issues arise from children working under hazardous conditions—particularly, on tobacco farms. Working on tobacco farms posses a serious threat to ones health. According to a Human Rights Watch report, many children working on tobacco farms reported vomiting, nausea, headaches, and dizziness. These are symptoms of both nicotine poising and “green tobacco sickness,” two medically diagnosable conditions. Nicotine poisoning can occur in a variety of ways. For one, when a worker is consistently handling tobacco leaves without proper protection, nicotine is absorbed through the skin. Additionally, many workers get sick from handling wet crops. When the crops are wet, from rain or morning dew, worker’s clothing absorbs the moisture from the leaves. According to the US National Library of Medicine, green tobacco sickness is especially harmful to children,

“[c]ompared with adults, children may be especially vulnerable to GTS because their body size is small relative to the dose of nicotine absorbed… especially after a recent rain. Without an awareness of the causes of GTS, children may fail to take effective precautions when handling green tobacco.”

Nicotine overdose may even cause seizures or death, yet one may be baffled to find that tobacco farming is not considered “hazardous” under current US Labor laws. This has become so problematic that the Tobacco Growers Association of North Carolina, which represents more than 2,300 tobacco farmers, released a statement affirming they do not condone the use of child labor. They strongly recommend tobacco farmers not to hire children under 16, and that only workers over 18 should work under hazardous conditions.

Author Megan McGinnis provides some justifications as to why the public and governments tolerate these laws in Child Farm Labor Under the Fair Labor Standards Act. According to McGinnis, “one primary reason for child labor is to provide income for the family.” Many farm-working children come from low-income families, so their children’s labor can be a significant source of income.  Other justifications are family tradition, cultural norms, and that children may learn responsibilities.

But what does this say about the US on an international scale? The US is a major advocate of international child labor standards. According to HRW, tobacco companies have responsibilities under the UN Guiding Principles of Business and Human Rights. HRW, and more than 50 other organizations, have urged the Obama administration to take legislative action in banning children from the hazardous working conditions of tobacco farms. What would it say about the United States credibility if they were found in violation of international human rights and labor protections?