How do we save the girls? 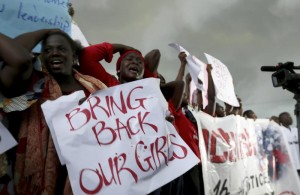 The April 14, 2014 abduction of 276 girls from a school in Chibok was not the first time Boko Haran has abducted women. Boko Haran, roughly translated “Western education is forbidden”, have kidnapped more than 500 women and girls from Nigeria since 2009.  In the past five years, there has been little information on what has happened to these women and girls in captivity. After the April 2014 abduction, Human Rights Watch has conducted several interviews with individuals who were abducted or individuals who witnessed the abductions. The interviews include twelve girls that escaped the abduction from the Chibok school. The report details the events that happened during the abduction, and how the survivors are coping with life after abduction.

The women and girls abducted were allegedly targeted for their Christian faith and attendance in western-styled school. The victims reported that the main focus of the abductors was to convert the women and girls to Islam. One young women described how the abductors would repeatedly threaten the girls with physical violence unless they converted to Islam, complied with Islamic dressing rules, and stopped attending school. She also described one particular instance where they put a noose around a girl’s neck and threatened death until she renounced her faith. When asked about sexual violence, most of the interviewees reported that the commanders made some effort to protect them from sexual violence. However, HRW documented that most of the sexual violence cases that did take place were after the victims were forced to marry. It is likely that the cases of sexual violence of the returned victims are underreported because of the culture of silence and shame associated with the conservative culture of North Nigeria.

The number of abductions since 2013, has increased dramatically and suggest a change of strategy of the terrorist group. Between 2009 and mid-2013, the group did not focus on women and girls. The group mainly focused on the Nigerian political system. However, the “success” of the abductions of women and girls has seemingly caused the group to refocus. The “success” of these attacks are in large part due to the inability of Nigeria’s security forces to protect their citizens.  The HRW interviews of witnesses to the attacks have stated that the lack of government response has only emboldened Boko Haram. In addition to the weak response,  Nigerian security forces have reacted with their own human rights abuses documented by HRW. HRW reports that “security forces have used excessive force, burned homes, engaged in physical abuse, ‘disappeared’ victims, and extra-judicially killed those suspected of supporting Boko Haram.” The Nigerian government has failed to protect victims and have failed to provide adequate help to returning victims.

It seems that the women and girls of Nigeria have been failed. It is necessary know to look at what the international community can do to help protect that’s women and girls. The Nigerian government along with the help of the international community should work together to encourage transparent investigations and prosecution of human rights violations by members of Boko Haram and by members of the Nigeria’s security forces. The government also needs to be able to provide the victims that have retuned with adequate services; including medical and mental health services. There also needs to be a platform to encourage victims of sexual and physical assault to be comfortable with coming forward.

You can read the full report from Human Rights Watch here.