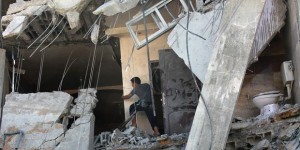 Amnesty International released a report on the latest Israeli operation in the Gaza Strip. The report, “Families under the Rubble” examines eight cases where residential family homes in Gaza were attacked by Israeli forces without warning during Operation Protective Edge in July and August 2014. The report exposes a pattern of attacks on civilian homes that suggests Israeli forces flouted the law of war by displaying callous indifference to the carnage caused to civilians by their campaign.

International Humanitarian law, codified in the Hague Regulations, Geneva Conventions and their Additional Protocols, requires that parties to an armed conflict must at all times distinguish between civilians and combatants, especially in that attacks may only be directed against combatants. A similar distinction must be made between civilian objects and military objectives. A corollary of the rule of distinction between civilian and military objects and objectives is that indiscriminate attacks are prohibited. International humanitarian law also prohibits disproportionate attacks, which are those that may be expected to cause incidental loss of civilian life, injury to civilians, or civilian objects, that would be excessive in relation to the concrete and direct military advantage anticipated. In general, indiscriminate and disproportionate attacks are considered war crimes. Further, according to the Rome Statute of the International Criminal Court, intentionally directing attacks against civilian populations as such or against individual civilians not taking direct part in hostilities and intentionally directing attacks against civilian objects constitutes war crimes.

Amnesty International found first, that the Israel government has not provided any explanation of what was being targeted and whether a military objective was even present, and second, that damage to the civilians, their homes, and property was disproportionate to the military advantage, if any, gained by launching the attacks. Therefore, Amnesty International, finding that Israeli forces displayed callous indifference towards civilians in their execution of their military operations, is guilty of committing war crimes.