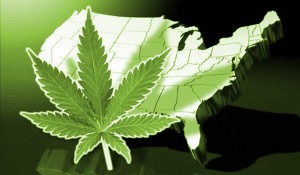 A recent poll shows that a majority of the United States supports the legalization of marijuana. According to the Drug Policy Alliance (DPA), the United States’ leading drug organization “promoting drug policies that are grounded in science, compassion, health and human rights,” 51% of Americans are in favor of the legalization of cannabis for recreational use. This poll was taken in October and was released after Alaska, Oregon, and Washington D.C. voted to legalize marijuana. The voting results are as follows: “Alaska, 52 percent voted in support, in Oregon it was nearly 56 percent and in D.C., the number was a whopping 69 percent.” The DPA argues that marijuana should be taken out of the criminal category and treated similarly to alcohol or tobacco, because there are so many safety and economic benefits. The DPA  explains some of these benefits as decreasing the wasting of law enforcement resources, significant tax revenues, reduction of court costs, and a formal economy versus the illicit markets.

The three recent votes bring the mainstream acceptance of marijuana one step further in the legalization movement. Although, federal law still criminalizes cannabis usage, the Obama administration has given leeway to states to determine their own regulations and “recreational use statutes”.

This United States hot topic has also brought some conflicted conversation to the international community, as the United Nations Office on Drugs and Crime (UNODC) has stated that the legalization of marijuana is not “compatible with existing conventions.” Yury Fedotov, the executive director of UNODC, claims he will raise this issue with the United States Department and other UN agencies next week. He also suggests that is part of a larger trend toward legalization.

For example, in 2013 Uruguay’s parliament passed a bill legalizing the sale and production of marijuana. The International Narcotics Control Board (INCB) asserts that this bill is in violation of the 1961 Single Convention on Narcotic Drugs. The convention has been ratified by both Uruguay and the United States. Essentially, the purpose of the convention is to combat drug use by “coordinated international action.” The convention intervenes in two different ways: “First, it seeks to limit the possession, use, trade in, distribution, import, export, manufacture and production of drugs exclusively to medical and scientific purposes. Second, it combats drug trafficking through international cooperation to deter and discourage drug traffickers.”

It is likely the INCB will find the recent United States legislation to be in violation with the convention as well. Is it realistic however, that the international community can really combat or intervene in legalized drug usage within a State? What can really be done if the United States legislation is in conflict with the convention? It appears the trend of legalizing marijuana is becoming more widespread in the United States and across international lines as well. Do you think this trend will cause an amendment to the convention, possibly taking cannabis off of the Schedule I list of the convention? Do you think the DPA’s arguments are valid?