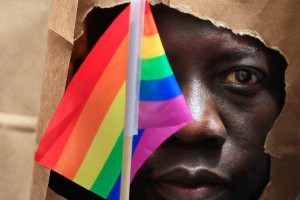 Earlier this month, Gambia passed one of the more superfluous anti-gay laws to date. The newest addition to the already homophobic criminal code is the offence of “aggravated homosexuality”—a crime carrying a punishment up to life in prison. Above its egregiously homophobic nature, the law is inexplicably vague. According to the criminal code, “a person commits the offence of aggravated homosexuality where the… offender is a person living with HIV Aids, or the offender is a serial offender.”

This circular definition leaves many scratching their head. In essence, a person commits aggravated homosexuality by being a serial offender—which begs the question. Remember in elementary school when your teacher explained that you couldn’t use a word in its definition? Apparently that rule doesn’t apply in the Gambia criminal code. Additionally under section (b) of the code, would being diagnosed with HIV equate to an automatic conviction? If read literally, the answer is yes because the statute does not require the offender to engage in homosexual activity. Such defectively written legislature only bolsters the palpable intent behind the statute. Usually legislators have the decency to hide behind clever wording, but that is not the case in Gambia. Gambia’s candidness would usually be commendable if it was not ridden with such disdain. Additionally, consensual, private sexual activity between same-sex adults is already illegal, so this new law only adds insult to injury.

According to Human Rights Watch, “at least three woman, four men, and a 17-year-old boy were arrested between November 7 and 13, and threatened with torture because of their presumed sexual orientation.” Specifically, the detainees were forced to confess, and include the names of others, or a device would be forced into their genitals or anus to “test” their sexual orientation. And if you were wondering, yes, the old law is in violation of international law as well.

And even the Gambian President, Yahya Jammeh, whole-heartedly supports the statute. In fact, Jammeh had made several inflammatory public statements against the LGBTI community. All signs point to a government-headed public witch hunt. Ironically enough, these detestable laws actually violate the Gambian Constitution itself, which expressly requires all people to be treated equal and free from discrimination.

So what’s next? Gambia had to answer for themselves at a UN review, but was able to circumvent the issue. It is uncontended that Gambia is in violation of international human rights treaties, but what is the next step? Can you think of any solutions that would not violate state autonomy? Better yet, at this point how much weight should be given to state autonomy?