Are children a choice or an inevitable milestone? 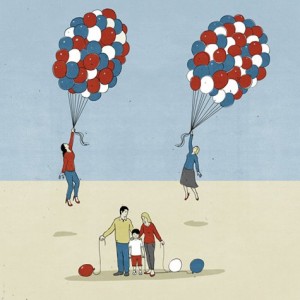 At one point, children were an inevitable milestone for the majority of families across the globe. The turning point for the United States? The 2008 economic crisis.

Reports show that the U.S. birthrate has fallen to its lowest level since accurate numbers were kept, beginning in the 1920’s. Our lower fertility rates now match those rates of other developed countries. In 2007, the fertility rate in America was 2.12, the highest of any advanced country. Today, the rate has dropped to 1.9. Other countries are experiencing similar declines, maybe not quite as sharp, but declines nonetheless.

Newsweek discusses the leading “global causes of postfamilialism.” For one, “the rush of people worldwide into cities…has ushered in prosperity for hundreds of millions, allowing families to be both smaller and more prosperous.” Improvements in contraception led to its widespread usage. For many women this coincided with a move away from religion, the focus being on maintaining a successful marriage rather than reproducing to meet the criteria of a religious interpretation of a successful marriage. And most importantly, in my opinion, as we saw “women’s rights largely secured in…their seats in the classroom, the statehouse, and the boardroom…children have ceased being an economic or cultural necessity for many or an eventual outcome of sex.”

These trends are apparent not just within our own borders, but world-wide, especially in other developed nations. For a country like Japan, where it is projected that by 2050 there will be more people over the age of eighty than under the age of fifteen, the decline in reproduction raises serious concerns. A bulk of its revenue goes to services for senior citizens. What does this mean for the country’s youth? What does this mean for the country itself – its development, growth, or lack thereof?

In Germany, thirty percent of women say that they do no intend to have children. Many Americans express similar sentiments about marriage as an increasing number characterize the exchanging of vows as “obsolete.” Yet even strong marriage-supporters do not attribute the same value to child-rearing. In fact, only forty-one percent of marriage-supporters say children are important for a marriage, whereas in 1990, the numbers were much higher at sixty-five percent.

Do we see this as a positive change for countries that are over-populated? Should we attribute the widespread decline in reproductive rates to financial difficulties, or are we down-sizing because our ideologies are changing?

Maybe we like seeing more women in the classroom, the statehouse, the boardroom. It’s becoming clear that women are occupied and pleasantly distracted by these demanding environments. And childbirth, it seems, will only occur if they so choose.

For more information, please use the following link: Newsweek