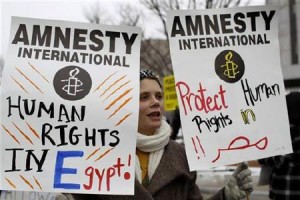 Egypt was one of the primary countries of the “Arab Spring”; ousting President Hosni Mubarak in 2011. With Mubarak gone, a new, more open Egypt was the goal with the first democratically elected president of Egypt, President Morsi, at the helm. This has not occurred, and a new draft law restricting Non-governmental organizations (NGO) is a prime example.

A new draft law has recently come to light due to the work of NGO Amnesty International. This law would restrict local entities, such as the Egyptian Organization for Human Rights, from working with larger, international NGOs, such as Amnesty International, without permission of Egyptian security bodies. Amnesty fears that this new law would restrict its ability to fund Egyptian organizations as well as the fact-finding visits the organization conducts. This in turn would lead to a less transparent nation and take away the ability of international NGOs from shining an international focus of potential crimes in Egypt.

Egypt’s Minister of Insurance and Social Affairs, Nagwa Hussein Khalil, stated that the effects of the potential law were to “organize the sector to make it more effective.” New thresholds would be established to achieve this. To register with the government, an NGO would need EGP 250,000 as opposed to EGP 10,000 under current law.Amnesty’s biggest fear is the vagueness of “international organizations” stating it could include not just NGOs but United Nations organizations as well. They have called the law restricting freedom of association “Mubarak-era practices” that Morsi was elected to destroy.

-Is Amnesty’s fear well founded or should Egypt attempt to organize what actors are playing a role in shaping their new nations?

– Under international law and the UN treaty, can a nation refuse to allow UN organizations from working in Egypt?