Justice for victims of the Bosnian Genocide? 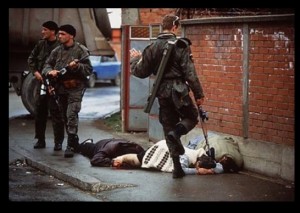 The July 2013 decision, reversing Radovan Karadzic’s acquittal, is music to the ears of many victims. The decision signals a turn of events in the debate concerning the Bosnian Genocide. A year ago in Karadzic’s trial, the lower court stated that no evidence of genocide was found in Bosnia in the years prior to the notorious Srebrenica massacre in 1995. The decision left victims feeling helpless and confused, especially since 1992 was the bloodiest year of the war. The downward spiral continued, acquittals for Serbian commanders became a trend. Thus, Karadzic’s acquittal drew criticism from Bosnian victims, human rights activists, legal experts, and on-lookers from around the world.

This year the voices of the victims were finally heard. On appeal, the tribunal for the former Yugoslavia reinstated Karadzic’s genocide charges for his criminal actions at the onset of the war. Judge Meron, the President of the tribunal for ex-Yugoslavia, said that the trial chamber had erred in dropping the second genocide charge because there was ample evidence presented during the trial that showed that “in meetings with Karadzic ‘it had been decided that . . . all Muslims would disappear from Bosnia” (N.Y. Times). The massacre in Srebrenica should not be classified any differently from the large-scale killing of all non-Serbians between 1992 through 1995.

The 1991 census, the year prior to the war revealed that Bosnia’s population consisted of 44 percent Bosnians (predominantly Muslim), 31 percent Serbians (predominantly Orthodox), and 17 percent Croatians (predominately Catholic). These three ethnicities that were once united became increasingly different from one another each passing day. Even though they all spoke the same language, ate the same food, and enjoyed a similar upbringing, certain Serbians began to think they were the superior race.

The Serbians went on the offensive to create a “Greater Serbia,” and to “fix” and cleanse the population by killing the Bosnian and Croatian people. Their actions reminded the world of the Hitler regime, the only difference being the name of the commander and a different “problem” race. Serbian forces led by Slobodan Milosevic launched their full-scale attack by bombing Bosnia and Herzegovina’s capital, Sarajevo.  “In 1992, at the height of the campaign, about 44,000 people were killed, almost half of the total of 100,000 people who died in the Bosnian war” (N.Y. Times).

Serbian forces killed hundreds of thousands of non-Serbians, raped women and children, “drove non-Serbs from their homes, incinerated dwellings, churches and mosques and mistreated and starved thousands in improvised camps” (N.Y. Times).  As an insider, someone who fled Bosnia with my parents in 1992, I personally feel as though the decision to reverse Karadzic’s acquittal was a movement towards justice for survivors and victims of the war, but time will tell what the final verdict will bring.  What do you think will happen on remand?  Do you believe that the entire war should be classified as genocide?